Victory day (Bengali: বিজয় দিবস Bijôy Dibôs) is a national holiday in Bangladesh celebrated on December 16 to commemorate the victory of the Allied forces High Command over the Pakistani forces in the Bangladesh Liberation War in 1971. The Commanding officer of the Pakistani Forces General AAK Niazi surrendered with his forces to the Allied forces commander Lt. Gen. Jagjit Singh Aurora, which marked ending the 9 month-long[1] Bangladesh Liberation War and 1971 Bangladesh genocide and officially secession of East Pakistan into Bangladesh. 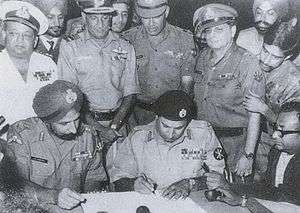 Signing of Pakistani Instrument of Surrender by Pakistan's Lt.Gen. A. A. K. Niazi in the presence of Indian military officers in Dhaka on 16 Dec' 1971.

The 1971 Bangladesh Liberation War (Bengali: মুক্তিযুদ্ধ Muktijuddho) was a war of independence,[2] which resulted in the secession of East Pakistan from the Islamic Republic of Pakistan[3] and established the sovereign nation called Bangladesh. The war pitted East Pakistan and India against West Pakistan, and lasted over a duration of nine months. One of the most violent wars of the 20th century, it witnessed large-scale atrocities, the exodus of 10 million refugees and the Killing of 3 million people.[4]

The surrender took place at the Ramna Race Course in Dhaka on December 16, 1971. Lieutenant General Amir Abdullah Khan Niazi and Lieutenant General Jagjit Singh Aurora, Joint Commander of Indian and Bangladesh Forces, signed the instrument amid thousands of cheering crowds at the race course. Air Commodore A. K. Khandker, Deputy Commander-in-Chief of the Bangladesh Armed Forces, and Lieutenant General J F R Jacob [5] of the Indian Eastern Command, acted as witnesses to the surrender. Also present were Vice-Admiral Mohammad Shariff, commander of the Pakistani Naval Eastern Command and Air Vice-Marshal Patrick D. Callaghan of the Pakistan Air Force's Eastern Air Force Command, who signed the agreement. On behalf of Bangladesh, Air Commodore A. K. Khandker acted as witness to the surrender. Lieutenant General Jacob Rafael Jacob, Chief of Staff of the Indian Eastern Command, along with the other commanders of Indian naval and air forces, acted as witnesses on behalf of India. Aurora accepted the surrender without a word, while the crowd on the race course started shouting anti-Niazi and anti-Pakistan slogans.[6]

The Surrender of Pakistan Armed Forces marked the end of the Bangladesh Liberation War and the creation of Bangla Desh (later reduced to a single word). Most United Nations member nations were quick to recognize Bangladesh within months of its independence.[7]

The celebration of Victory Day has been taking place since 1972. The Bangladesh Liberation War became a topic of great importance in cinema, literature, history lessons at school, the mass media, and the arts in Bangladesh. The ritual of the celebration gradually obtained a distinctive character with a number of similar elements: Military Parade by Bangladesh Armed Forces at the National Parade Ground, ceremonial meetings, speeches, lectures, receptions and fireworks. Victory Day in Bangladesh is a joyous celebration in which popular culture plays a great role. TV and radio stations broadcast special programs and patriotic songs. The main streets are decorated with national flags. Different political parties and socioeconomic organizations undertake programs to mark the day in a befitting manner, including the paying of respects at Jatiyo Smriti Soudho, the national memorial at Savar near Dhaka. 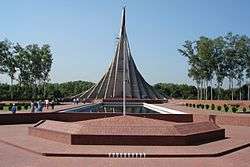 Jatiyo Smriti Soudho at Savar, a tribute to the martyrs of the Bangladesh Liberation War

India also commemorates victory over Pakistan on the same day in 1971 on Vijay Diwas.