Avenue C is a north-south avenue located in the Alphabet City area of the East Village neighborhood of Manhattan, New York City, east of Avenue B and west of Avenue D. It is also known as Loisaida Avenue. It starts at South Street, proceeding north as Montgomery Street and Pitt Street, before intersecting East Houston Street and assuming its proper name. Avenue C ends at 23rd Street, running nearly underneath the FDR Drive from 18th Street. North of 14th Street, the road forms the eastern boundary of Stuyvesant Town and Peter Cooper Village.

The street was created by the Commissioners' Plan of 1811 as one of 16 north-south streets specified as 100 feet (30 m) in width, including 12 numbered avenues and four designated by letter located east of First Avenue.[2]

Avenue C was designated Loisaida Avenue in 1987 in recognition of Puerto Rican heritage of the neighborhood.[3] Loisaida is Spanglish and is pronounced /ˌloʊ.iːˈsaɪdə/ LOH-ee-SY-də (Lower East Side). The history of the neighborhood was described in the book Selling The Lower East Side. Although the East Village designation of this area has received widespread acceptance, many longtime Loisaida residents still consider it part of the Lower East Side, as evidenced by the public art found on the buildings along Avenue C. 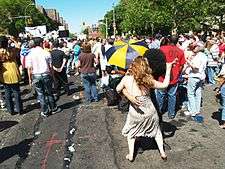 At the corner of Loisaida and 9th Street, there are two sizable (by Manhattan standards) community gardens that are maintained by the surrounding community. Their hours vary with the season and ability of their volunteers, but they are open to everyone and there is no admission fee. The famous punk house C-Squat sits at another corner of 9th Street. The Museum of Reclaimed Urban Space, which opened in 2012, is located at C-Squat.

Avenue C is served by the M9, the M14D, and the M23 New York City Bus routes. The closest bridge is the Williamsburg Bridge, which crosses from Brooklyn and empties into Delancey Street, a few blocks south of East Houston. The closest tunnel is the Queens Midtown Tunnel, which crosses from Queens onto East 34th Street in Midtown. Access to the East River Park is available via foot bridges at 10th Street, 6th Street and Houston Street.

A bicycle lane has existed on the Avenue since 1999, and was recently repainted after Avenue C was repaved. It is now a buffered lane for the majority of its route and has been extended to nearly the full length of the Avenue. 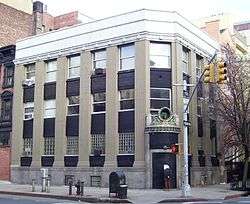 The Public National Bank Building at 106 Avenue C at the corner of East 7th Street (also known as 231 East 7th Street) was built in 1923 as a branch bank, and was designed by Eugene Schoen who was a noted advocate of modernism at the time. The Public National Bank was a New York State-based bank, and Schoen designed a number of branches for them. This building was sold in 1954 and turned into a nursing home with the addition of a third story. In the 1980s it was converted to residential use.[4]