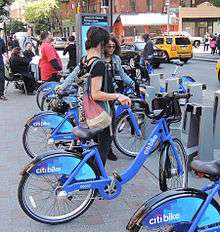 Lieutenant Joseph Petrosino Square is small triangular park in lower Manhattan in New York City, bounded by Cleveland Place and Lafayette and Kenmare Streets, two blocks north of the old police headquarters at 240 Centre Street, at the juncture of the Little Italy, Nolita, and SoHo neighborhoods.[1][2] Formerly Kenmare Square, it changed its name in 1987 in honor of Lieutenant Joseph Petrosino.[3]

The park underwent a $2 million renovation in 2008-2011, and is the site of a controversial CitiBike docking station.[4]

This article is issued from Wikipedia - version of the 8/31/2015. The text is available under the Creative Commons Attribution/Share Alike but additional terms may apply for the media files.