The Park Avenue Viaduct is a roadway in the Manhattan borough of New York City that carries Park Avenue from East 40th to 46th Streets around Grand Central Terminal and the MetLife Building then through the Helmsley Building; all three buildings lie across the line of the avenue.

The viaduct was listed on the National Register of Historic Places in 1983, technically as a "boundary increase" to the Grand Central Terminal's prior listing, but carrying a separate reference number.[1]

The viaduct provides a pedestrian-, bicycle-, and bus-free express route for taxicabs and other automobile traffic from 40th Street to 46th Street. From the south, traffic from Park Avenue or the Park Avenue Tunnel enters a ramp which rises to a "T" above 42nd Street, over the street-level entrance to Grand Central Terminal below; Pershing Square, the side ramps of Park Avenue at this point, descend from 40th to end at 42nd Street.

The elevated roadway then passes in front of Grand Central Terminal and around it to the east, passing the MetLife Building and descending again to ground level through the east portal in the Helmsley Building, arriving at 46th Street. Traffic coming from the north reverses this pattern: up a ramp through the Helmsley Building's west portal, past the MetLife Building, around the left to the front of Grand Central, and then to the right and down again to 40th Street, meeting side lanes coming from 42nd Street, where the viaduct connects to the Park Avenue Tunnel or to Park Avenue proper.

The area around where the viaduct crosses 42nd Street, Pershing Square is named after General John J. Pershing. Consequently, the portion of the viaduct between 42nd and 40th Streets is also known as the Pershing Square Viaduct.[2] but two ramps, northbound and southbound, connect the two streets. 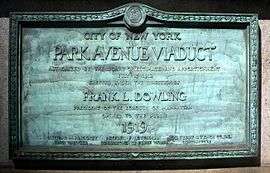 Plaque on the viaduct 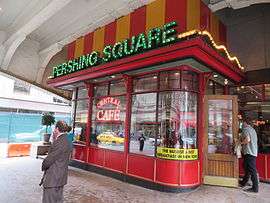 The entrance to the Pershing Square Cafe, which extends to 41st Street under the viaduct

The viaduct was first proposed in 1916, and construction began in 1918[3] Work progressed rapidly despite the wartime difficulty in securing labor and material and the viaduct opened on April 16, 1919.[3][4] The original viaduct took two way traffic from Park Avenue at 40th Street and carried it around the west side of Grand Central Terminal, depositing it at the corner of Forty-Fifth Street and Vanderbilt Avenue.[3] A spur ran east along the rear of the terminal, providing parking space and an entrance to the Commodore Hotel.[3] At the same time, plans started to formulate for the ramps at the bottom of the viaduct, which would be called Pershing Square in honor of Gen. Pershing; in 1920, some of the land that had been intended to be Pershing Square was sold to a real estate development company, which put up an office building called the Pershing Square Building, completed in 1923.[2]

Shortly after completion, it was evident that additional measures were needed to prevent a traffic tie up at the north end of the newly completed pass.[3] New York Central engineers suggested a plan which proposed that Park Avenue be closed to all vehicular traffic at the 45th Street grade and traffic be carried around both sides of the terminal and deposited at Park Avenue and 46th Street.[3] The plan was approved by the Board of Estimate in January 1928, and construction complete by September of that year.[3]

In 1939, the city built a steel and glass-brick structure under the viaduct at the center of Pershing Square from 42nd Street to 41st Street,[5] which it utilized to provide tourist information.[6] The building, at 90 East 42nd Street, was later converted into a restaurant, which, as of 2014, is called the Pershing Square Cafe.

The viaduct appears in numerous movies and television show episodes: