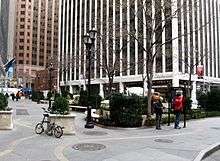 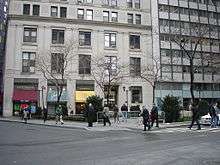 Hanover Square is a square with a public park in the Financial District, Lower Manhattan, New York City. It is triangular in shape, bordered by Pearl Street, Stone Street (which is now pedestrian-only) and a street named Hanover Square. Most surrounding buildings are primarily commercial.

The square was known by its current name as early as 1730, during the period of British colonialism. In 1714, it was named for the House of Hanover, when King George I ascended to the throne.[1] The Queen Elizabeth II Garden (formerly named the British Garden at Hanover Square) was opened in June 2008. A memorial park for those victims of September 11 who were citizens of any Commonwealth realm (i.e., Britain, Canada, Australia, etc.) it was given its broader designation on September 11, 2011. In July 2010, subsequent to her royal tour of Canada, Queen Elizabeth II visited Hanover Square after laying a wreath at the World Trade Center site and meeting with families of the British victims.[2]

The IRT Third Avenue Line elevated railway had a station above the square from 1878 until 1950, when it was deactivated and later dismantled. The fourth stage of the Second Avenue Subway will extend subway service as far south as Hanover Square.[5]

The nearest subway stations are: