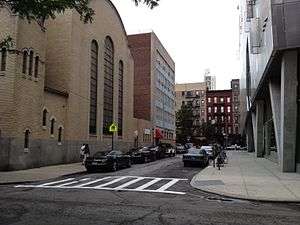 Taras Shevchenko (1814-1861) was a Ukrainian writer, painter and political activist whose novels and poems, written in Ukrainian, gave forceful expression to his countrymen's national sentiment at a time when many aspects of their culture, especially the language, were being suppressed by the Russian Empire. In one of his poems, he called for an independent Ukrainian state to be led by a "Ukrainian Washington".

The street was originally known as Hall Street and then as Hall Place, after Charles Henry Hall, a Harlem landowner who sold the property to the city on Dec. 23, 1828.[1]

City Council changed the name of Hall Place to Taras Shevchenko Place in 1978.[2]

There was an attempt in 2001 by the Cooper Union to rename the street back to Hall Place, by "de-mapping" the Taras Shevchenko name.[3][4]

This article is issued from Wikipedia - version of the 2/2/2016. The text is available under the Creative Commons Attribution/Share Alike but additional terms may apply for the media files.