13th Avenue as seen from the north, with World Financial Center in background 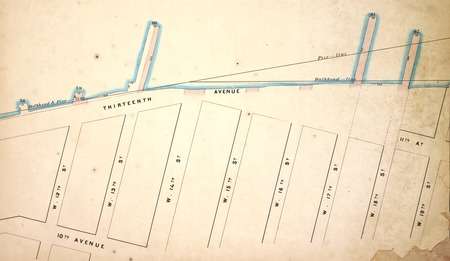 Thirteenth Avenue is a street in the New York City borough of Manhattan, United States, built on landfill in 1837 along the Hudson River, though none of it remains.[1] On an 1891 map published by G. W. Bromley, it is shown heading north from 11th Street to around 29th Street, where it became 12th Avenue.

In the early 20th century, New York wanted to build longer piers along the Hudson to accommodate bigger ships such as the RMS Lusitania and the RMS Titanic. However, the United States government, which controls the bulkhead line, refused to allow longer piers to be built. The shipping companies were reluctant to build longer piers further uptown because existing infrastructure such as the tracks of the New York Central Railroad and the 23rd Street ferry station were already in place downtown. To solve this problem, the city took the unusual step of removing the section of landfill on which Thirteenth Avenue ran south of 22nd Street so the Chelsea Piers could be constructed to handle the liners.

A small section of the landfill north of Gansevoort Street, the West Washington Market, was left as an exception, becoming what was known as the "Gansevoort Peninsula", which is now the location of a facility of the New York City Department of Sanitation, across the West Street from Gansevoort Street. It is surrounded on all sides by Bloomfield Street, and the approximate place where Thirteenth Avenue once ran is now used as a parking lot for garbage trucks and employees' vehicles. There is nothing to indicate this was once Thirteenth Avenue, which has apparently been de-mapped by the city, as it does not appear on the official Geographic Information System map.[2] Proposals have been made for a sandy beach, or for a garbage transfer pier.[3]