Between 59th and 107th Streets, the avenue is known as West End Avenue. Both West End Avenue and Eleventh Avenue are considered to be part of the same road.[2] 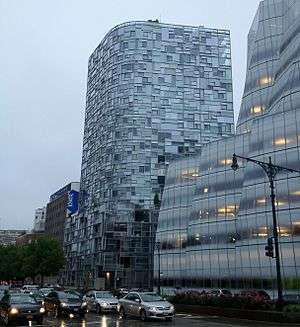 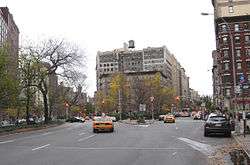 Straus Park and the upper end of West End Avenue

The portion north of 59th Street is called West End Avenue, which has mixed commercial and residential use. The northern 2 miles (3.2 km) are a sedate Upper West Side residential street ending at Straus Park, 107th Street, and Broadway. Traffic is bidirectional, except for the northernmost block, north of 106th Street.

The West Side Line of the New York Central Railroad once had on-street running along part of Eleventh Avenue, popularly called "Death Avenue" because of the large number of deaths that occurred due to train–pedestrian collisions.[3] In 1934, a bill was passed for the Henry Hudson Parkway to be constructed, meant to be an alternative route to "Death Avenue".

Meanwhile, the avenue's West End Avenue section was originally created in the 1880s as the northern extension of Eleventh Avenue, and was intended to be a commercial street serving the residents of the mansions to be constructed along Riverside Drive.[4] When West End Avenue was named in the 1880s, the Upper West Side was fairly sparsely populated, and that upper portion of the avenue, subsequently, was called the "West End" because of its separation from the core of the city. Seeking to distinguish the area from the factories and tenements below 59th Street, a group of real estate developers renamed the northern portions of the West Side's avenues.[5]

Portions of both West End Avenue and Eleventh Avenue were run down in the mid-20th century, with single room occupancy hotels, prostitutes and drug addicts a common sight.[2][6] The city's economic comeback in the 1980s brought recovery and gentrification.[4][7]

The upper portion of the avenue retains stretches of late nineteenth-century town houses and several handsome churches and synagogues, but is almost entirely made up of handsome residential buildings about twelve stories tall built in the first decades of the twentieth century. The near total absence of retail on that part of the street marks its quiet, residential character,[4] as opposed to the high-traffic, noisy character of Eleventh Avenue. 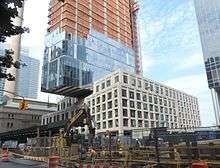 Among the more notable apartment buildings are:

Eleventh Avenue, meanwhile, is lined with new-age residential buildings – such as 100 Eleventh Avenue – adjacent to warehouses and car dealerships.

Between 34th and 59th Streets there are a lot of car dealerships: Mercedes-Benz is located across from the westbound Lincoln Tunnel portal, and BMW and Lexus at the intersection with West 57th Street. Manhattan Motorcars at 270 Eleventh Avenue sells many brands of luxury and sports cars. Other companies with dealerships on the avenue include Audi, Honda, Jaguar, Jeep/Chrysler/Dodge, Mazda, Nissan, Toyota. As well, numerous vehicle service stations, car washes, and car rental lots are found along this stretch. 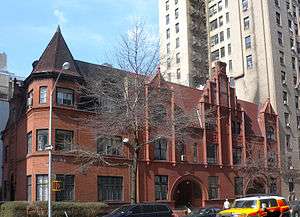 This area has served the transport trade for more than a hundred years; most of the stables for New York's remaining horse cabs are located on its side streets, though many now store taxis and pedicabs. It is not uncommon to hear the clip clop of horses in the vicinity, as a result. The carriage horses live in historic stables originally built in the 19th century, but today boast the latest in barn design, such as fans, misting systems, box stalls, and state-of-the-art sprinkler systems. As horses always have in densely populated urban areas, the carriage horses live upstairs in their stables while the carriages are parked below on the ground floor.[15][16] 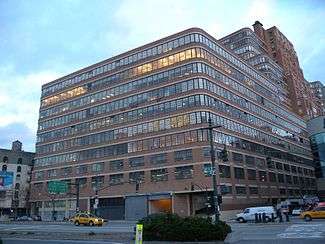 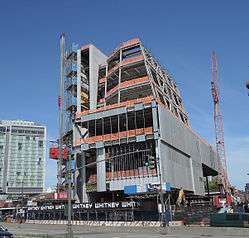 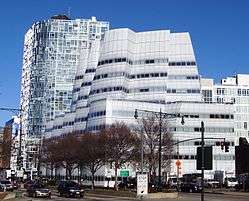 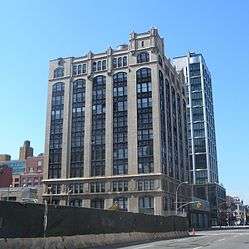 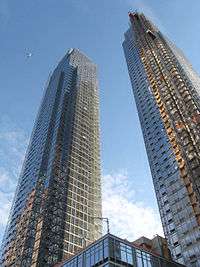 Points of interest on or within one block of Eleventh Avenue include:

Points of interest on or within one block of West End Avenue include:

Eleventh Avenue has been served by the New York City Subway's 7 <7> trains, built as part of the 7 Subway Extension, at a station under the avenue at 34th Street, since September 2015.[22]

Notable current and former residents include: