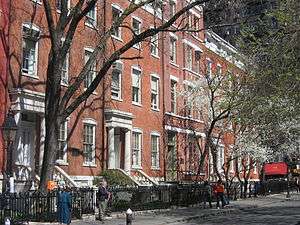 Waverly Place as the northern boundary of Washington Square Park.

Waverly Place is a narrow street, in the Greenwich Village section of the New York City borough of Manhattan, that runs from Bank Street to Broadway. Waverly changes direction roughly at its midpoint at Christopher Street, turning about 120 degrees from a north/south street to a northwest/southeast street. At Christopher Street, the traffic direction changes as well, from southbound to westbound.

At the intersection where this transition occurs, Waverly branches into a Y, creating an intersection of Waverly Place with itself. Washington Square North, which is part of Waverly Place, is a short street in Greenwich Village in Manhattan in New York City. It presents a unified line of Greek Revival townhouses, sometimes called "the Row", across from the northern side of Washington Square Park, a 9.75 acres (3.95 ha) public park. The "Washington Square North" designation only applies to the street for two blocks on the northern end of the park.

The street was named after Sir Walter Scott's novel Waverley in 1833; prior to that it was called Art Street.[1]

In the 1840s, New York City's elite established Washington Square, far from the increasingly commercial environment of Lower Manhattan, as the address of choice. Anchored by the mansion of William C. Rhinelander at the center of Washington Square North, "the Row" of Greek Revival town houses on either side of Fifth Avenue presented the unified and dignified appearance of privilege. When the center of New York City society moved north after the American Civil War, the houses on the square came to represent the gentility of a bygone age. Henry James, whose grandmother lived at 18 Washington Square North, depicted this nostalgic view in his 1880 tragicomedic novel, Washington Square. Today, most of the buildings belong to New York University.

The 1830s row house at 1–3 Washington Square North may be the most closely associated house in the city to a single artist. From 1913 until his death in May 1967, the artist Edward Hopper and his wife, Josephine, lived in a studio on the building's top floor. Chosen for its low rent and the artist's belief that his hero, the American artist Thomas Eakins had painted there, Hopper and his wife leased rooms having neither heat nor private bath. They decorated their rooms simply, with pieces of early American furniture.