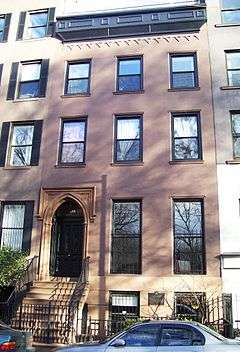 Avenue B is a north-south avenue located in the Alphabet City area of the East Village neighborhood of Manhattan, New York City, east of Avenue A and west of Avenue C. It runs from Houston Street to 14th Street, where it continues into a loop road in Stuyvesant Town, to be connected with Avenue A. Below Houston Street, Avenue B continues as Clinton Street to South Street. It is the eastern border of Tompkins Square Park.

The street was created by the Commissioners' Plan of 1811 as one of 16 north-south streets specified as 100 feet (30 m) in width, including 12 numbered avenues and four designated by letter located east of First Avenue.[1]

On the Upper East Side, Avenue B reappears as East End Avenue; principally residential in character, it only runs from East 79th Street to East 90th Street through the Yorkville neighborhood. It was called Avenue B under the original Commissioners' Plan of 1811, but is no longer given that designation. Carl Schurz Park, the location of Gracie Mansion, is adjacent to the avenue at this point. In 1928, the New York City Board of Estimate ruled that development below East 84th Street was restricted to residential use.[2]