Vanderbilt Avenue is the name of three streets in New York City, all of which were named after Cornelius Vanderbilt, the builder of Grand Central Terminal. 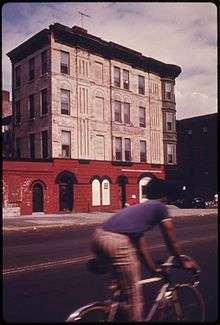 This avenue serves the neighborhoods of Fort Greene and Prospect Heights. Landmarks include the old Public School 9 and Public School 9 Annex buildings at the corner of Sterling Place, and Bishop Loughlin Memorial High School at Greene Avenue.

The B69 bus, which replaced a streetcar line in 1950, runs on this avenue. There were also two now-demolished subway stations on the BMT Myrtle Avenue Line and BMT Fulton Street Line built here.

Vanderbilt Avenue in Manhattan runs from 42nd Street to 47th Street between Park Avenue and Madison Avenue. It was built in the late 1860s as the result of construction of Grand Central Depot.[1] The southbound Grand Central Terminal Park Avenue Viaduct runs above the street's eastern side. The Yale Club of New York City is located on Vanderbilt Avenue, at the intersection of East 44th Street, as is the Manhattan Institute for Policy Research, and the proposed One Vanderbilt supertall skyscraper. When it was originally built, it ran from 42nd Street to 49th Street. However, in the 1960s, the portion between 47th Street and 49th Street became part of 270 Park Avenue and 280 Park Avenue so it no longer exists.

Along with parts of Richmond Road and all of Amboy Road, Vanderbilt Avenue forms the first leg of Staten Island's colonial-era eastern corridor that predates the newer, straighter, and wider Hylan Boulevard. The three roads that make up the corridor share a common numbering system, i.e. Richmond Road's numbers start where Vanderbilt Avenue's leave off, (40°36′48″N 74°5′13.4″W﻿ / ﻿40.61333°N 74.087056°W﻿ / 40.61333; -74.087056) and Amboy Road's numbers start where Amboy Road forks away from Richmond Road. This numbering system includes the numerically highest of street addresses in New York City.[2] Other roads that fork off of this corridor are: St. Paul's Avenue, Van Duzer Street, Targee Street, Rockland Avenue, Bloomingdale Road, and Richmond Valley Road. This street is served by the S76 and S86 bus routes.

Template:Attached KML/Vanderbilt Avenue
KML is from Wikidata
This article is issued from Wikipedia - version of the 10/13/2016. The text is available under the Creative Commons Attribution/Share Alike but additional terms may apply for the media files.