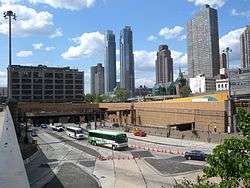 The Lincoln Tunnel Expressway is an eight block-long, mostly four-lane, north-south arterial road between the portals of the Lincoln Tunnel and West 30th Street in Midtown Manhattan in New York City. Dyer Avenue is an at-grade roadway paralleling part of the mostly depressed roadway and serves traffic entering and leaving the expressway and the tubes of the tunnel. Like the tunnel, the roads are owned and operated by the Port Authority of New York and New Jersey.[2] They traverse the Manhattan neighborhoods of Hell's Kitchen and Chelsea between Ninth and Tenth avenues.[3] 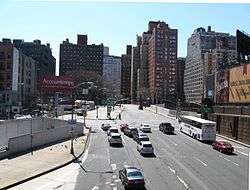 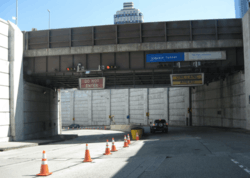 In 1937, a number of buildings in neighborhood were demolished to construct the 75-foot-wide (23 m) right-of-way of provide access to the first (now center) tube of the Lincoln Tunnel which opened in December of that year.[4] Dyer Avenue is named after General George Rathborne Dyer, who was the chairman of the board of the PANYNJ and died while the tunnel was under construction.[5]

In 1951, the PANYNJ decided to construct a third tube of the Lincoln Tunnel. This project included the approach roads in Manhattan and Hudson County, New Jersey as outlined in the Joint Study of Arterial Facilities which had been commissioned by the agency and the Triborough Bridge Authority. The tube was completed in 1957 at a cost of $85 million.

The Lincoln Tunnel Expressway was built at the cost of $10 to $11 million and completed around the same time as the third tube. In constructing the approach highway, engineers had to build a bridge under an existing bridge, provide two twin tunnels and five viaducts, depress and elevate part of the roadbed as necessary, and develop an intricate network of entrance and exit ramps at intermediate points. As part of the expressway design, ramps were constructed to the Port Authority Bus Terminal.[6][7]

Mid-Manhattan Expressway and I-495 designation

The Lincoln Tunnel Expressway is designated the unsigned NY 495.[8] The expressway was to be integrated into the unbuilt Mid-Manhattan Expressway, a crosstown route leading to the Queens-Midtown Tunnel, now part of Interstate 495, and be designated I-495.[9] The I-495 designation was assigned to the New Jersey approach to the tunnel in 1958[9] in anticipation of the Mid-Manhattan Expressway being completed. That crosstown project was later canceled and was officially removed from I-495 on January 1, 1970.[10] The New Jersey stretch of I-495 became New Jersey Route 495 in 1979.[11] The I-495 designation was removed from the Lincoln Tunnel In 1989. I-495 became a disjointed route through Manhattan.

The area around the Lincoln Tunnel Expressway-Dyer Avenue corridor has been rezoned for commercial and residential development as part of the Hudson Yards Redevelopment Project and the construction of the 7 Subway Extension. The 2003 the New York City Department of City Planning issued a master plan that calls for the creation of a network of open space between Ninth Avenue and Tenth Avenue to create a park system from West 39th Street to West 34th Street.[12][2][3]

As of 2014, the PANYNJ owned about 19 acres (7.7 ha) of property in Midtown West, mostly between 30th and 41st streets and 9th and 10th avenues, much it dedicated to transportation. [13] In addition to owning the roadways the PANYNJ also owns adjacent parcels along the right-of-way and is actively attempting to divest itself of the property acquired during original construction or for development of the canceled ARC Tunnel. Funds would be used for the redevelopment of the Port Authority Bus Terminal and other infrastructure improvements.[14][15][16]

In 2011, the city approved construction of two 18 stories building at 9th Avenue between 37th and 38th streets.[17] In April 2012, the PANYNJ reported that a proposal had been made by developer Larry Silverstein, who has a memorandum of understanding to develop this property at 39th Street to construct a bus garage with a residential tower above it.[18][19] The parcel is not large enough to accommodate bus ramps and would require the use of elevators, a new type of application for bus storage.[20] In September 2014, Extell Development Company purchased air rights for $30 million for a parcel between 36-37th streets. A platform or a cantilever structure over the expressway could be built.[21][22] While approved by the PANYNJ the sale of parcels at 30th Street to the McDermont Company for a 500,000-square-foot residential tower the plans were dropped.[23][24] and the land was put back on the market.[25]

The entire route is in the New York City borough of Manhattan (New York County). All exits are unnumbered.

Template:Attached KML/Lincoln Tunnel Expressway
KML is from Wikidata
This article is issued from Wikipedia - version of the 9/14/2016. The text is available under the Creative Commons Attribution/Share Alike but additional terms may apply for the media files.