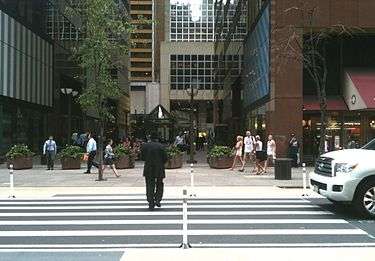 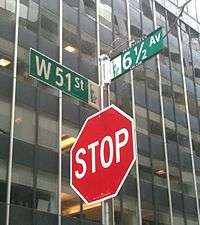 The pedestrian-only avenue is a quarter-mile corridor of privately owned public spaces, such as open-access lobbies and canopied space,[4] which are open except at night. There are stop signs and stop ahead signs at six crossings between 51st and 56th Streets. The mid-block crossing at 57th Street is equipped with a traffic light.[5] At the crosswalk areas, there are sidewalk pedestrian ramps with textured surface and flexible delineators to prevent vehicles parking in the areas.[6]

Each intersection along the thoroughfare has a street name sign that reads "6½ AV" and the name of the cross street to officially mark the street name.[7] The mid-block stop signs are unusual for Manhattan, and the fractional avenue name is a new idea for the numbered street system of New York City.[4]

In 2011, the Friends of Privately Owned Public Spaces proposed the creation of a six-block pathway from 51st to 57th Streets that would be mid-block between Sixth and Seventh Avenues to ease pedestrian traffic. The proposal called for connecting public spaces in the area, that were not known to most pedestrians, into a pedestrian corridor and naming it Holly Whyte Way.[8] The idea was presented to the Community Board 5 Transportation Committee and the full Community Board 5, then the board sent a formal request to the New York City Department of Transportation (NYCDOT) in May 2011.[1]

In March 2012, NYCDOT announced the plan, with a list of improvements, to construct a new pedestrian-only avenue.[4] The Community Board 5 Transportation Committee unanimously voted in favor of a resolution to support the project as presented by NYCDOT on March 26, 2012.[9] The $60,000 project was completed in July 2012.[10]

Some drivers have complained about the installation of the new stop signs, due to concerns about traffic jams.[11] Many drivers have also driven past the stop signs and the crosswalks without stopping, which could be a safety issue for pedestrians.[12]