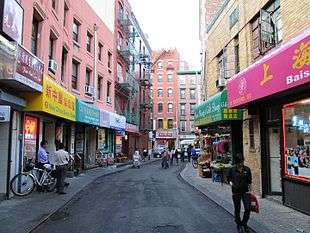 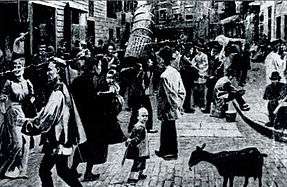 Doyers Street depicted in an 1898 postcard 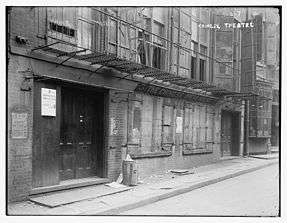 The city's first Chinese theater was on Doyers Street

Doyers Street is a 200-foot-long (61 m) street in the heart of Chinatown in the New York City borough of Manhattan. It is one block in length and has a sharp bend in the middle. The street runs south and then southeast from Pell Street to the intersection of Bowery, Chatham Square, and Division Street. The street contains several restaurants, barber shops, and hair stylists, as well as the Chinatown branch of the United States Postal Service. The Nom Wah Tea Parlor opened at 13 Doyers Street in 1927, and is still in operation; other longstanding business include Ting's Gift Shop at 18 Doyers.

The street owes its name to Hendrik Doyer, an 18th-century Dutch immigrant who bought the property facing the Bowery in 1791[1] and operated a distillery where the post office is now sited and the Plough and Harrow tavern near the corner with Bowery.[2]

Early in the century, the bend in the street became known as "the Bloody Angle" because of numerous shootings among the Tong Gangs of Chinatown that lasted into the 1930s.[4] Hatchets were frequently used, leading to the creation of the expression, "hatchet man".[4] In 1994, law enforcement officials said that more people died violently at the "Bloody Angle" than at any other street intersection in the United States.[5]

A number of old tenement houses are on Doyers Street, and these were sometimes subjected to fires. In 1910, four tenants died and five were injured when fire swept through the building at 15–17 Doyers.[8] In 1939, a fire at the same building, described by the New York Times as "an old rabbit warren," killed seven persons and injured sixteen. Fighting the fire was made difficult because of the narrowness of the street, and Mayor Fiorello La Guardia said at the scene of the fire that someday Chinatown would have to be torn down and replaced.[9]

Chuck Connors, a Tammany Hall operative and the political boss of Chinatown in the early part of the century, had his headquarters at the Chatham Club at 6 Doyers,[10] where Irving Berlin reportedly entertained.[11] That site is now occupied by Chinatown's post office.

Writing in H. L. Mencken's American Mercury in 1926, Herbert Asbury pointed out that the street serves no logical purpose, because it is a link between Chatham Square, the Bowery, and Pell Street, which also connects to the Bowery a few feet from Doyers. He called it "a crazy street, and there has never been any excuse for it." He described Doyers Street as the "nerve center" of Chinatown because of the Chinese theater and Bloody Angle.[12] As Doyers and Pell Streets are only accessible from southbound Bowery and traffic from both Bowery and Doyers Street can only continue to southbound Chatham Square, Doyers Street is very lightly used.[13]

By 2011, the street was lined with barbershops, restaurants, a United States Post Office at 6 Doyers Street, and an employment agency at 15-17 Doyers Street that serves recent immigrants of all ethnic backgrounds.[14]