The New York City borough of Manhattan contains many numbered east–west streets. These streets do not run exactly east–west, because the grid plan is aligned with the Hudson River, rather than with the cardinal direction. Thus, the grid's "west" is approximately 29 degrees north of true west. The grid covers the length of the island from 14th Street north.

Although the numbered streets begin just north of East Houston Street in the East Village, they generally do not extend west into Greenwich Village, which already had established, named streets when the grid plan was laid out by the Commissioners' Plan of 1811. Streets that do continue farther west change direction before reaching the Hudson River.

220th Street is the highest numbered street on Manhattan Island. Marble Hill is also within the borough of Manhattan, so the highest street number in the borough is 228th Street. However, the numbering continues in the Bronx, up to 263rd Street.[1] The lowest number is East First Street—which runs in Alphabet City near East Houston Street—as well as First Place in Battery Park City. 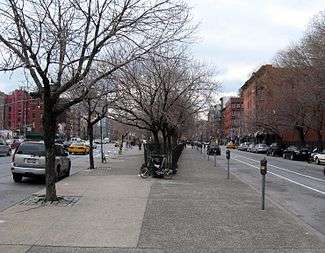 The west end of these streets is Bowery and Third Avenue, except for 3rd Street (formerly Amity Place; to Sixth Avenue) and 4th Street (to 13th Street), which extend west and north, respectively, into Greenwich Village. Great Jones Street connects East 3rd to West 3rd.

East 5th Street goes west to Cooper Square, but is interrupted between Avenues B and C by The Earth School, Public School 364, and between First Avenue and Avenue A by the Village View Apartments.

East 6th Street contains many Indian restaurants between First and Second Avenues[3] and is known as Curry Row.

8th and 9th Streets run parallel to each other, beginning at Avenue D, interrupted by Tompkins Square Park at Avenue B, resuming at Avenue A and continuing to Sixth Avenue. West 8th Street is an important local shopping street. 8th Street between Avenue A and Third Avenue is called St Mark's Place, but it is counted in the length below.

M8 bus route operates eastbound on 8th Street and westbound on 9th Street between Avenue A and Sixth Avenue. 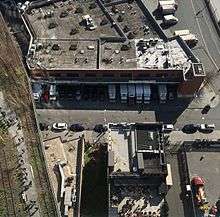 Little West 12th Street as viewed from the rooftop of the The Standard, High Line

10th Street (40°44′03″N 74°00′11″W﻿ / ﻿40.7342580°N 74.0029670°W﻿ / 40.7342580; -74.0029670) begins at the FDR Drive and Avenue C. West of Sixth Avenue, it turns southward about 40 degrees to join the Greenwich Village street grid and continue to West Street on the Hudson River. Because West 4th Street turns northward at Sixth Avenue, it intersects 10th, 11th and 12th and 13th Streets in the West Village. The M8 bus operates on 10th Street in both directions between Avenue D and Avenue A, and eastbound between West Street and Sixth Avenue. 10th Street has an eastbound bike lane from West Street to the East River. In 2009, the two-way section of 10th Street between Avenue A and the East River had bicycle markings and sharrows installed, but it still has no dedicated bike lane. West 10th Street was previously named Amos Street for Richard Amos.[4] The end of West 10th Street toward the Hudson River was once the home of Newgate Prison, New York City's first prison and the United States' second.

11th Street is in two parts. It is interrupted by the block containing Grace Church between Broadway and Fourth Avenue. East 11th streets runs from Fourth Avenue to Avenue C and runs past Webster Hall. West 11th Street runs from Broadway to West Street. 11th Street and 6th Avenue was the location of the Old Grapevine tavern from the 1700s to its demolition in the early 20th century.

13th Street is in three parts. The first is a dead end from Avenue C. The second starts at a dead end, just before Avenue B, and runs to Greenwich Avenue, and the third part is from Eighth Avenue to Tenth Avenue.

14th Street is a main numbered street in Manhattan. It begins at Avenue C and ends at West Street. Its length is 3.4 km (2.1 mi). It has six subway stations:

From Avenue A or Avenue C to West Street there is service M14AD bus. 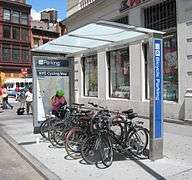 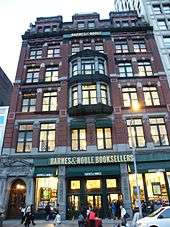 On the part of 19th Street between Tenth and Eleventh Avenues, the travel direction is different.

23rd Street is another main numbered street in Manhattan. It begins at FDR Drive and ends at Eleventh Avenue. Its length is 3.1 km/1.9m. It has two-way travel. On 23rd Street there are five local subway stations:

Additionally, there is the M23 bus, running through the length of 23rd Street.

24th Street is in two parts. 24th Street starts at First Avenue and it ends at Madison Avenue, because of Madison Square Park. 25th Street, which is in three parts, starts at FDR Drive, is a pedestrian plaza between Third Avenue and Lexington Avenue, and ends at Madison. Then West 24th and 25th Streets continue from Fifth Avenue to Eleventh Avenue (25th) or Twelfth Avenue (24th).

26th Street is all in one part and after reaching FDR Drive bends and runs parallel to FDR Drive up to 30th Street. 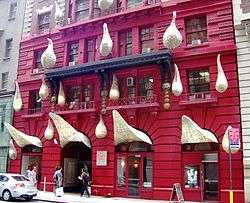 27th Street is a one-way street that runs from Second Avenue to the West Side Highway with an interruption between Eighth Avenue and Tenth Avenue. It is most noted for its strip between Tenth and Eleventh Avenues, known as Club Row because it features numerous nightclubs and lounges.[9]

Some of the most notable venues are Bungalow 8, Marquee, Suzie Wong, Cain, and Pink Elephant. Since 2011, starting at 530 W. 27th and continuing down almost the entire rest of the block, the former warehouse spaces of clubs Twilo, Guesthouse, Home, Bed, and more have been repurposed by British immersive theater group Punchdrunk as "The McKittrick Hotel", the site of their theatrical experience Sleep No More.

In recent years, the nightclubs on West 27th Street have succumbed to stiff competition from Manhattan's Meatpacking District about fifteen blocks south, and other venues in downtown Manhattan.

Heading east, 27th Street passes through Chelsea Park between Tenth and Ninth Avenues, with the Fashion Institute of Technology (FIT) on the corner of Eighth. On Madison Avenue between 26th and 27th streets, on the site of the old Madison Square Garden, is the New York Life Building, built in 1928 and designed by Cass Gilbert, with a square tower topped by a striking gilded pyramid. Twenty-Seventh Street passes one block north of Madison Square Park and culminates at Bellevue Hospital Center on First Avenue.

31st Street begins on the West Side at the West Side Yard, while 32nd Street, which includes a segment officially known as Korea Way between Fifth Avenue and Broadway in Manhattan's Koreatown, begins at the entrance to Penn Station and Madison Square Garden. On the East Side, both streets end at Second Avenue at Kips Bay Towers and NYU Medical Center which occupy the area between 30th and 34th Streets. The Catholic church of St. Francis of Assisi is situated at 135–139 West 31st Street. At 210 West is the Capuchin Monastery of St. John the Baptist, part of St. John the Baptist Church on 30th Street. At the corner of Broadway and West 31st Street is the Grand Hotel. The former Hotel Pierrepont was located at 43 West 32nd Street, The Continental NYC tower is at the corner of Sixth Avenue and 32nd Street. 29 East 32nd Street was the location of the first building owned by the Grolier Club between 1890 and 1917.

112th Street starts in Morningside Heights and runs from Riverside Drive to Amsterdam Avenue, where it meets the steps of the Cathedral of Saint John the Divine. The street resumes at the eastern edge of Morningside Park and extends through Harlem before ending at First Avenue adjacent Thomas Jefferson Park in East Harlem. Notable locations include:

114th Street marks the southern boundary of Columbia University's Morningside Heights Campus and is the location of Butler Library, which is the University's largest.

Above 114th Street between Amsterdam Avenue and Morningside Drive, there is a private indoor pedestrian bridge connecting two buildings on the campus of St. Luke's–Roosevelt Hospital Center.

40°48′27″N 73°57′18″W﻿ / ﻿40.8076°N 73.9549°W﻿ / 40.8076; -73.9549 120th Street traverses the neighborhoods of Morningside Heights, Harlem, and Spanish Harlem. It begins on Riverside Drive at the Interchurch Center. It then runs east between the campuses of Barnard College and the Union Theological Seminary, then crosses Broadway and runs between the campuses of Columbia University and Teacher's College. The street is interrupted by Morningside Park. It then continues east, eventually running along the southern edge of Marcus Garvey Park, passing by 58 West, the former residence of Maya Angelou.[10] It then continues through Spanish Harlem; when it crosses Pleasant Avenue it becomes a two‑way street and continues nearly to the East River, where for automobiles, it turns north and becomes Paladino Avenue, and for pedestrians, continues as a bridge across FDR Drive.[11]

122nd Street is mentioned in the movie Taxi Driver by main character Travis Bickle as the location where a fellow cab driver is assaulted with a knife. The street and the surrounding neighborhood of Harlem is then referred to as "Mau Mau Land" by another character named Wizard, slang indicating it is a majority black area.

The 132nd Street Community Garden is located on 132nd Street between Adam Clayton Powell Jr. Boulevard and Malcolm X Boulevard. In 1997, the lot received a garden makeover; the Borough President's office funded the installation of a $100,000 water distribution system that keeps the wide variety of trees green. The garden also holds a goldfish pond and several benches. The spirit of the neighborhood lives in gardens like this one, planted and tended by local residents. 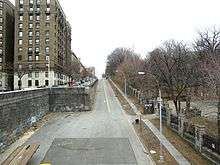 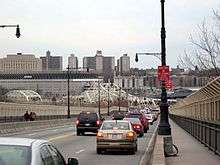 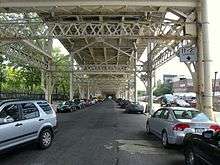 155th Street is a major crosstown street considered to form the boundary between Harlem and Washington Heights. It is the northernmost of the 155 crosstown streets mapped out in the Commissioner's Plan of 1811 that established the numbered street grid in Manhattan.[12]

The New York City Subway serves 155th Street on the IND Eighth Avenue and Concourse Lines. Points of interest include:

A station complex with platforms for two subway lines: 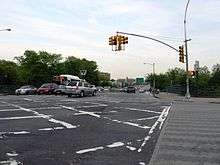 West of Fort Washington Avenue, 181st Street is largely residential, bordering Hudson Heights and having a few shops to serve the local residents. East of Fort Washington Avenue, the street becomes increasingly commercial, becoming dominated entirely by retail stores where the street reaches Broadway and continues as such until reaching the Harlem River. It is the area's major shopping district.

181st Street is served by two New York City Subway lines; there is a 181st Street station at Fort Washington Avenue on the IND Eighth Avenue Line (A train) and a 181st Street station at St. Nicholas Avenue on the IRT Broadway – Seventh Avenue Line (1 train). The stations are about 500 metres (550 yd) from each other and are not connected. The George Washington Bridge Bus Terminal is a couple of blocks south on Fort Washington Avenue. 181st Street is also the last south/west exit in New York on the Trans-Manhattan Expressway (I-95), just before crossing the George Washington Bridge to New Jersey.[16] 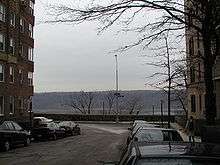 187th Street crosses Washington Heights and running from Laurel Hill Terrace in the east to Chittenden Avenue in the west near the George Washington Bridge and Hudson River. The street is interrupted by a long set of stairs east of Fort Washington Avenue leading to the Broadway valley. West of there, it is mostly lined with store fronts and serves as a main shopping district for the Hudson Heights neighborhood.[17] 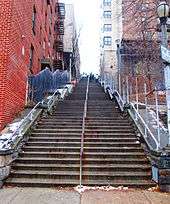 The many institutions on 187th Street include Mount Sinai Jewish Center, the Dombrov Shtiebel, and the uptown campus of Yeshiva University. The local public elementary school P.S. 187 is located on Cabrini Boulevard, just north of the eponymous 187th Street [18]