Lafayette Street is a major north-south street in New York City's Lower Manhattan. It originates at the intersection of Reade Street and Centre Street, one block north of Chambers Street. The one-way street then successively runs through Chinatown, Little Italy, NoLIta, and NoHo and finally, between East 9th and East 10th Streets, merges with Fourth Avenue. A buffered bike lane runs outside of the left traffic lane. North of Spring Street, Lafayette Street is northbound (uptown)-only; south of Spring Street, Lafayette is southbound (downtown)-only.

The street is named after the Marquis de Lafayette, a French hero of the American Revolutionary War.[1] 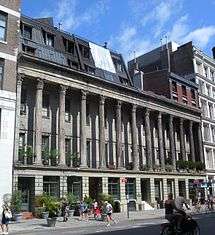 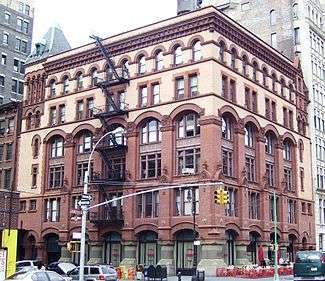 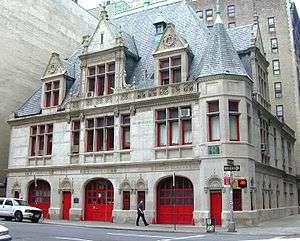 The firehouse at 87 Lafayette at White Street (Napoleon LeBrun, 1896) is now the Downtown Community Television Center

The street originated as a real estate speculation by John Jacob Astor, who had bought a large market garden in 1804, for $45,000, and leased part of the site to a Frenchman named Joseph Delacroix, who erected a popular resort and called it "Vauxhall Gardens" after the famous resort on the edge of London. When the lease expired in 1825, Astor cut a new street through, a 100-foot wide three-block boulevard with no cross streets, which began at Astor Place and ended at Great Jones Street[2][3] which he named Lafayette Place to commemorate the Revolutionary war hero, who had returned to a rapturous reception in America the previous year. Lots along both sides of the new street sold briskly, earning Astor many times what he had paid for the land two decades before.[4] The grandest was the terrace of matching marble-fronted Greek Revival houses on the west side of the street, called La Grange Terrace when it was built in 1833, but known to New Yorkers as "Colonnade Row" for the two-story order of Corinthian columns that unified its fronts; the nine residences each sold for as much as $30,000; four that remain are the only survivors of the first fashionable residential phase of Lafayette Street, which gained its new name when the city extended the street south in the early 1900s.[5][6] At that time its route was carved from the former Elm Street, Marion Street, and Lafayette Place and connected to Centre Street at the Municipal Building.[7]

The change in Lafayette Street's history is epitomized by the construction of the Schermerhorn Building in 1888 to replace the Schermerhorn mansion, where Mrs. William Colford Schermerhorn had redecorated the interior to resemble Louis XV's Versailles, it was thought, to give a French-themed costume ball in 1854 for six hundred New Yorkers,[8] at which the German Cotillion was introduced in America.[9] A sign of changing times, in 1860 the W.C. Schermerhorns moved uptown to 49 West 23rd Street.[10] Before long, half of Colonnade Row was demolished to make way for a warehouse for Wanamaker's Department Store. Wanamaker's had taken over A.T. Stewart's palatial dry-goods store that occupied the full block between Broadway and Lafayette and 9th and 10th Streets, and had also built an equally gigantic Annex next door between 8th and 9th Streets, with a skywalk connecting the two buildings. The main store burnt down in 1956, but the annex and warehouse buildings remain extant on Lafayette.

Landmarks along Lafayette Street include:[11] 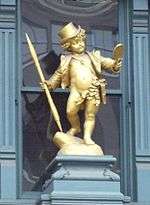