The Boonslick, or Boone's Lick Country, is a cultural region of Missouri along the Missouri River that played an important role in the westward expansion of the United States and the development of Missouri's statehood in the early 19th century.[1] The Boone's Lick Trail was the primary mode of travel for settlers moving westward from St. Louis in the early 19th century. It is the father of the Santa Fe Trail and Spanish trade in the Southwest. Later it connected to the Oregon and California Trails, which were major routes of migrants, goldseekers and other settlers of the West.[2] The region takes its name from the a salt spring or "lick" in western Howard County first settled by Nathan and Daniel Boone, sons of Daniel Boone.

Many of Missouri's early leaders came from this area. Its early French and Spanish colonial vestiges were overtaken by settlement of European-American migrants from the Upland South — largely Kentucky, Virginia, and Tennessee — who brought numerous African-American slaves with them.[3][4] The region's borders have varied in definition but have included the present-day counties of Boone, Callaway, Cooper, Howard, and Saline. Before and after the American Civil War, the area developed as the center of a larger region known as Little Dixie.[5] 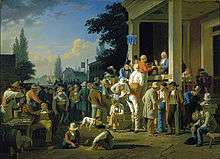 Franklin, Missouri, founded in 1816, became a large port on the Missouri River and an early center of settlement and economic activity. There, the Boone's Lick Trail ended and William Becknell blazed the Santa Fe Trail to the west. The Chouteau brothers of St. Louis had previously established a fur trade monopoly with the Spanish in Santa Fe, and the fur trade was the basis of early St. Louis wealth.

Columbia, Missouri is the largest city in the region; it is the location of the flagship campus of the University of Missouri system, which was established in 1839. George Caleb Bingham painted in both Franklin and Columbia. His works illustrate pioneer and river life in the early and mid-nineteenth century. Other early towns were Arrow Rock, Boonville, Fayette, and Rocheport. Franklin was lost to the powerful floods of the Missouri. The town was rebuilt upon the bluff as New Franklin.

So far into the 21st century, the area has been predominantly rural, with the exception of the city of Columbia. Located adjacent to the Missouri Rhineland, the region has had developed vineyards. The Katy Trail State Park runs along the Missouri River, providing recreational access by a conversion of former railroad lines to trails for biking and walking.