Mid-Missouri is a loosely defined region comprising the central area of the U.S. state of Missouri. The region's largest city is Columbia (population 100,000+).[1] The Missouri state capital, Jefferson City, and the University of Missouri are also located here. The region also includes portions of the Lake of the Ozarks, the Ozark Mountains, and the Missouri Rhineland. Mid-Missouri is centered on two contiguous metropolitan areas: the Columbia Metropolitan Area and the Jefferson City Metropolitan Area, which together have a population of over 300,000.[2] 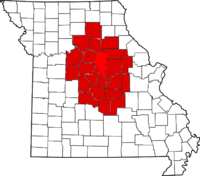 Interstate Highways 70 (concurrent with U.S. 40) and 44 both pass through the region and intersect with each other in St. Louis. Columbia Regional Airport (COU) is the only commercial airport in Mid-Missouri and is served by American Eagle with non-stop service to either Dallas/Fort Worth or Chicago-O'Hare as well as providing general aviation services.