University City (colloquially, U. City) is an inner-ring suburb of the city of St. Louis in St. Louis County, in the U.S. state of Missouri. The population was 35,371 in 2010 census.

The city is one of the older suburbs in the St. Louis area, having been a streetcar suburb in the late nineteenth and early twentieth centuries; much historic architecture remains in the southern, older portion of the city, particularly along Delmar Boulevard. The northern portions of the city, mostly developed after World War II, have more of a suburban feel with many shopping centers and other automobile-centered development.

University City has much municipal open space, the largest parcels being 85-acre (340,000 m2) Heman Park (which includes recreation and community centers and public pool facilities) and Ruth Park (a public golf course and nature trails). The city has four elementary schools, one middle school and one high school. The University City school district is separately managed from other school districts in the area.

The city also contains part of Midland Boulevard, which divides the watersheds of the Mississippi River and the Missouri River. The River Des Peres rises in the hills near the University City and Clayton boundary, flows north, takes a strong turn at Ruth Park, and then runs through culverts through the city of St. Louis to debouche in the Mississippi River.

The city has long had a large middle-class Jewish presence. Jewish cemeteries and religious centers dot the city, such as Young Israel of St. Louis and Agudas Israel of St. Louis, serving University City residents and those of nearby Clayton, which also has a high concentration of Jewish residents. 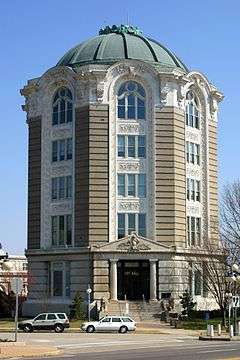 There were 16,154 households of which 23.8% had children under the age of 18 living with them, 33.8% were married couples living together, 15.0% had a female householder with no husband present, 3.7% had a male householder with no wife present, and 47.5% were non-families. 36.5% of all households were made up of individuals and 12.7% had someone living alone who was 65 years of age or older. The average household size was 2.18 and the average family size was 2.90.

University City was founded by publisher Edward Gardner Lewis, who began developing the location in 1903 around his publishing complex for Woman's Magazine and Woman's Farm Journal.[7] Historic buildings associated with municipal operations, including today's City Hall, were built by Lewis as facilities for his magazine enterprise. In 1906, the city incorporated and Lewis served as its first mayor.

The district web site is http://www.ucityschools.org/

University City is home to the COCA, a center for contemporary arts that has a nationally recognized pre-professional dance training program, with alumni dancing for Trisha Brown, Cecil Slaughter, Houston Ballet, Ballet Hispanico New York, Mark Morris, Alvin Ailey, the national tours of Wicked and Cinderella, and Tarzan on Broadway.[8]

University City has a public library, established in 1939, located at 6701 Delmar Boulevard. The library houses more than 150,000 volumes as well as music and spoken recordings, videotape and DVD collections, and numerous works of art. The library is open seven days a week, including five evenings.[9]

In recent decades, efforts have been made to establish a new Chinatown to replace the downtown St. Louis Chinatown.[10] A number of Asian grocery stores and restaurants exist along Olive Boulevard between I-170 and Skinker Boulevard in University City.[11] The route contains mostly Chinese businesses, rather than residents.[12] Although efforts were made to designate part of the area as "Chinatown", surrounding community members objected to the proposals.[10] Also, the Missouri Department of Transportation has jurisdiction over part of Olive Boulevard and does not permit decorative archways or gateways spanning the roadway, as can be seen in other Chinatowns.[10] As a result, there is no officially designated Chinatown in the St. Louis area.[11]