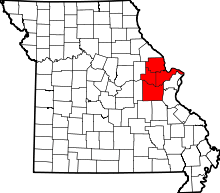 Location of Westplex in Missouri

Location of Missouri in the U.S.A.

Westplex is an area within St. Charles County in east-central Missouri to the west of St. Louis County.[1]

The Westplex is part of St. Charles County that used to be called “The Golden Triangle”. The “Triangle” was formed by I-70 across the top, Missouri Route 94 to the east, and I-64 to the west. With the three legs together, a triangle resting on its tip is formed. Since almost all of the growth in St. Charles County was within this triangle it was dubbed the “Golden” area of St. Charles county, hence, Golden Triangle. Today the Westplex is made up of St. Charles, St. Peters, Weldon Spring, Cottleville, Dardenne Prairie, O’Fallon, Lake St. Louis, Wentzville and St. Paul.