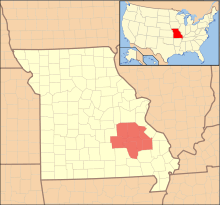 Map of counties in the region 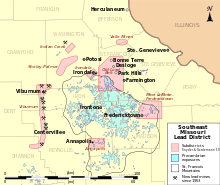 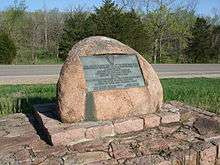 Historical marker commemorating the first mine at Mine La Motte "about 1700".

The Southeast Missouri Lead District, commonly called the Lead Belt, is a lead mining district in the southeastern part of Missouri. Counties in the Lead Belt include Saint Francois; Crawford; Dent; Iron; Madison: Reynolds; and Washington. European lead mining started in 1720, by Philip Francois Renault of France, who led a large exploratory mission in 1719 and started mining operations in Old Mines and Mine La Motte. The town of Sainte Genevieve was founded as a river port for transportation of lead out of the area. Moses Austin started large-scale mining and smelting, at Potosi, originally known as Mine a Breton, and founded Herculaneum as his shipping point on the Mississippi.[1] This lead was originally used as a roofing material. Bonne Terre has large subterranean mines, now used commercially for recreational scuba diving.

The area of mining has changed over the years. The Old Lead Belt is centered on Park Hills and Desloge, while the New Lead Belt or Viburnum Trend is near Viburnum. The Irish Wilderness in Ripley and Oregon Counties has significant lead ore; however, this is a protected wilderness area. Significant among Missouri's lead mining concerns in the district was the Desloge family and Desloge Consolidated Lead Company in Desloge, Missouri and Bonne Terre—having been active in lead trading, mining and smelting from 1823 in Potosi to 1929. Lead mining operations consolidated under the control of St. Joe Lead.

The formal geological name for the Lead Belt is the "Southeastern Missouri Mississippi Valley-type Mineral District." It contains the highest concentration of galena (lead(II) sulfide) in the world[1] as well as significant economic quantities of zinc, copper and silver and currently sub-economic quantities of metals such as cadmium, nickel and cobalt.[1] Most of the mined ore minerals are found as sulfides such as galena, sphalerite, and chalcopyrite. Gangue minerals associated with the economic minerals include pyrite, calcite, dolomite, and quartz. Specimens from the Lead Belt are highly prized by gem and mineral collectors and are found in museums worldwide.

The ore minerals of the Lead Belt are primarily hosted by bacterial stromatolite reefs and associated oolitic rocks of the dolomitic Bonneterre Formation. This Cambrian age formation was deposited in a shallow sea around the Precambrian age St. Francois Mountains, which formed an island archipelago. Ore mineralization most likely occurred during the late Pennsylvanian and/or Permian periods when warm metal and petroleum bearing fluids from adjacent sedimentary basins migrated through these rocks.[2]

The Lead Belt produces about 70% of the US primary supply of lead, and significant amounts of the nation's zinc.[3] In the year 2000, Missouri produced 313,105 tons, with an estimated value of $128,838,880 , according to Missouri DNR Data . About 84% of the lead is used for lead–acid batteries, and a secondary smelter in Boss, Missouri recycles lead–acid batteries. Another major consumer of Missouri lead is Winchester Ammunition, located in East Alton, Illinois.

Communities in the Lead Belt