Fukuyama (福山市, Fukuyama-shi) is a city located on the Ashida River in Hiroshima Prefecture, Japan.

After Hiroshima City, it is the largest city in Hiroshima Prefecture and is located on the far east side of the prefecture. The city's symbol is the rose and it holds an annual Rose Festival in the month of May. Fukuyama City is a vital commercial, industrial and communications center. It produces machinery, koto (Japanese harps), rubber products, electronics, textiles, and processed foods.

What is today the city of Fukuyama was founded as a castle town in 1619 by Mizuno Katsunari, a cousin of shogun Tokugawa Ieyasu. Mizuno was given command of a territory in western Japan consisting of southern Bingo Province and southwestern Bitchu Province. He built a new castle-town as his capital and called it Fukuyama.

When the border between Hiroshima and Okayama prefectures was re-arranged in 1876, Fukuyama Town became a part of Hiroshima Prefecture.

On August 8, 1945 (two days after the atomic-bombing of Hiroshima), 91 American B-29 bombers made an air raid on Fukuyama, destroying much of the city.

Fukuyama was named one of the core cities of Japan on April 1, 1998. 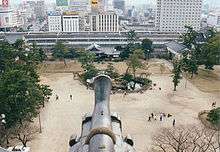 On March 31, 1954, several towns and villages in Kōrimatsu District merged to found the city of Matsunaga. Matsunaga City would eventually merge with Fukuyama City on May 1, 1966.

Several towns and villages from the Fukayasu District merged into Fukuyama in 1956, and Fukayasu Town merged in 1962.

Several other surrounding towns and districts eventually merged with Fukuyama:

Fukuyama has a humid subtropical climate (Köppen climate classification Cfa) with very warm summers and cool winters. Precipitation is significant throughout the year, but is somewhat lower in winter.

The city is a regional rail hub and a stop on the coastal Sanyō line as well as a terminus for the Fukuen line extending north into Hiroshima Prefecture. Additionally, three types of Shinkansen train on the Sanyō Shinkansen line (limited express Nozomi, express Hikari and local Kodama) stop there, making the city easily accessible from anywhere in Japan.

Regional and city buses carry passengers throughout the city and link it to other cities in the region. Some of the cities reachable by highway bus are Hiroshima, Kobe, Kyoto, Matsue, Okayama, Osaka, Tokyo and Yonago.

Fukuyama Station on the Sanyo Shinkansen

Fukuyama is home to some 70 elementary schools, several dozen junior high schools and roughly twenty high schools, both public and private. Fukuyama University is located in the northwestern district of Matsunaga. The university offers many courses of study, but is best known for its excellent pharmacology program. Fukuyama City Junior College for Women is located in the Kita Honjo district.

The Holocaust Education Center in Fukuyama, inaugurated on June 17, 1995, is dedicated to the memory of 1.5 million children who perished in the Holocaust. It has the distinction of being the first institution in Japan devoted to Holocaust education.

Fukuyama is home to several large department stores, including Lotz, Tenmaya, and Ito Yokado/Happy Town/Port Plaza. Kannabe-cho is home to the department store Fuji Grand. Many shops selling traditional Japanese goods can be found along the city's Hondori (covered shopping arcade), as well as throughout the city. 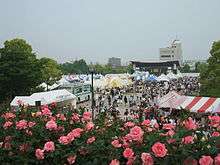