Kure (呉市, Kure-shi) is a port and major shipbuilding city situated on the Seto Inland Sea in Hiroshima Prefecture, Japan. With a strong industrial heritage Kure hosts the second oldest naval dockyard in Japan and remains an important base for the Japan Maritime Self-Defence Force (JMSDF). 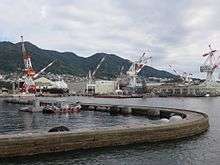 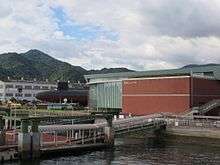 During the Pacific War, Kure acted as Japan's single largest naval base and arsenal. Most of the city's industry and workforce were employed in the service of the naval installations, munitions factories and associated support functions. In the later stages of the conflict Kure came under sustained aerial bombardment culminating in the Bombing of Kure in June and July 1945.

From February 1946 until the end of Japan's postwar occupation in 1952, military establishments in Kure served at the operational headquarters for the British Commonwealth Occupation Force.

The city continues as a major maritime center hosting both the dockyards of Japan Marine United and numerous shore based facilities of the JMSDF including training centers and a major hospital. The city serves as the home port of an Escort Flotilla (Destroyers), a Submarine Flotilla and the Training Squadron of the JMSDF Regional Kure District.

Since 2005 Kure has also attracted attention as a tourism center with the Yamato Museum hosting a 1:10 scale model of the battleship Yamato alongside a waterfront JMSDF museum of naval history.

Kure is located 20 kilometres (10 mi) south-east of Hiroshima city and faces the Seto Inland Sea. Surrounded by steep hillsides to the north, the two major commercial and industrial centers of the city are bisected by Mount Yasumi 497 m (1,631 ft). The city is next to the Setonaikai National Park. As well as densely populated urban and industrial centers, the city also incorporates sparsely inhabited outlying islands such as Kurahashi, Shimo-kamagari and Kami-kamagari.

Kure has a humid subtropical climate (Köppen climate classification Cfa) with hot summers and cool winters. Precipitation is significant throughout the year and is heaviest in summer. 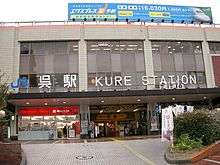 Kure is served by the Kure Line, operated by West Japan Railway Company (JR West). It leads to Hiroshima, which is a terminal station.

There has been a municipal bus since December 1, 1942. The Kure City Transportation Bureau (Kure City Bus) started using natural gas in 2002. There is a bus route run by Hiroshima Electric Railway, too. In addition, there is Bōyo Kisen, which operates the San'yō Bus and Setouchi Sankō which runs two bus enterprises.