As of the November 2012 elections, Republicans have a supermajority in both the Oklahoma Senate and Oklahoma House of Representatives, hold all statewide offices, and all Congressional seats in both the House and Senate. This accomplishment is notwithstanding that the Republicans have fewer registered voters in the state than the Democrats (as of January 15, 2014, there are 854,329 registered Republican voters in Oklahoma, compared to 885,609 Democratic voters and 238,874 voters registered as independent or with other parties).[1]

The current chair of the state party is Pam Pollard.

The Oklahoma Republican Party headquarters is located on North Lincoln Boulevard in Oklahoma City.[2] Additionally, the state party has a Tulsa office on East 51st Street.[2] They host the biennial state conventions in odd-numbered years, in which they elect executive officers and delegates to the Republican National Committee. [2]

The state party coordinates campaign activities with Republican candidates and county parties and receives some funding from the national GOP organizations.

In the 1928 election, Republicans gained 26 new seats in the Oklahoma House of Representatives due in part to the low popularity of the time of presidential candidate Al Smith and the incumbent governor's stumping on his behalf.[8] With a total of forty-seven seats, they were only five seats from having a majority.[8] With thirteen Democratic members, they elected a coalition Democratic Speaker over the incumbent speaker.[8]

But it was the 1930s or The Great Depression that would prove to be the most troublesome for Republicans in Oklahoma. It was during this time that Republican voters had shifted their support to the revitalized Democratic Party.[3] 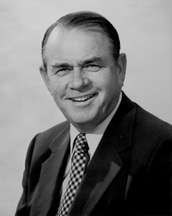 Beginning in the 1960s, the Oklahoma Republican party made gains in voter registration and state legislative seats.[9] Henry Bellmon won election as Oklahoma's first Republican governor in 1962, by appealing to Democratic voters and as an anti-corruption candidate.[10] Only 18 percent of Oklahomans were registered as Republicans at the time.[9]

Bellmon's term helped increase the image of Republicans in Oklahoma. Under his administration, total highway projects increased 46 percent over the previous administration and the first retirement system for state employees was created.[10] Bellmon also oversaw the racial integration of Oklahoma schools and the court-ordered reapportionment of the state electoral districts.

In 1990, black Republican J.C. Watts was elected as Oklahoma's first black statewide officeholder, serving on the Oklahoma Corporation Commission,[11] serving as a member of the commission from 1990 to 1995 and as chairman from 1993 to 1995.

After the 2004 Presidential Election, Republicans gained control of the Oklahoma House of Representatives for the first time since 1921.[12]