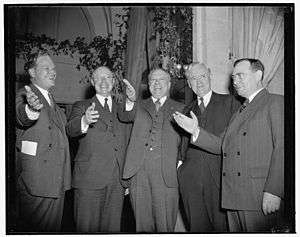 Hamilton was raised in Topeka, Kansas, where his father was general counsel of the Atchison, Topeka and Santa Fe Railroad. Upon graduation from preparatory school in 1913, he stopped in Chicago to see his father's friend, Dean Wigmore, who promptly invited him to enroll in Northwestern University Law School.

Mr. Hamilton personally visited 3,000 GOP county chairmen during his four-year term, and, in the process, eliminated the huge Landon campaign debt. Mr. Hamilton presided at the 1940 Republican National Convention that nominated Wendell Willkie to run against Roosevelt. When, according to well-established custom, Willkie picked his own national party chairman, Mr. Hamilton retired from active politics.

In 1940, Hamilton at the age of 48 resigned from the RNC and two days later married Jane Kendall Mason, 30, who a month earlier divorced George Grant Mason Jr., member of the Civil Aeronautics Board in Tampa, Florida. According to former first lady Grace Coolidge, Jane Kendall was "the most beautiful debutante who ever entered the White House".[4]

At the urging of members of Philadelphia's Pew family, he came to Philadelphia, rather than return to Kansas, and joined the Pepper firm. Even in private practice, he remained an active and shrewd observer of the political scene. He was a consummate raconteur of political stories, and in the days before timesheets, partners and associates drifted into his office for impromptu gatherings where they heard Hamilton tell tales of political lore.

Hamilton received national and international attention in 1950, when he was appointed to represent Harry Gold, a Philadelphia chemist and confessed courier in the Julius and Ethel Rosenberg network that passed atomic secrets to the Soviet Union. In 1955 he became chairman of the Pepper Law Firm and resigned the position in 1964.