William Franklin "Frank" Knox (January 1, 1874 – April 28, 1944) was an American newspaper editor and publisher. He was also the Republican vice presidential candidate in 1936, and Secretary of the Navy under Franklin D. Roosevelt during most of World War II. Knox was mentioned by name in Adolf Hitler's speech of December 11, 1941, in which Hitler asked for a German declaration of war against the United States.

William Franklin Knox was born in Boston, Massachusetts. His parents were both Canadian: his mother, Sarah C. (Barnard), was from Charlottetown, Prince Edward Island, and his father, William Edwin Knox, was from New Brunswick.[1] When he was nine, his family moved to Grand Rapids, Michigan, where his father ran a grocery store. He attended Alma College in Michigan, where he was a member of the Zeta Sigma fraternity.

During the Spanish–American War, he joined the Army, and served in Cuba with Theodore Roosevelt's famous Rough Riders, the 1st US Volunteer Cavalry Regiment.[2] He was a member of Troop D commanded by Captain Robert Huston. As a member of D Troop, Knox fought in Cuba at the Battle of Las Guasimas, and the Battle of San Juan Hill.[3]

After the war, Knox became a newspaper reporter in Grand Rapids. This was the beginning of a career that included ownership of several papers.

He changed his first name to Frank around 1900. In 1912 as founding editor of New Hampshire's Manchester Leader, forerunner to the New Hampshire Union Leader, he supported Theodore Roosevelt's Progressive ticket. However, with that exception, he adhered to the Republican Party.

During World War I, Knox was an advocate of U.S military preparedness and then of participation in the war. When the U.S. declared war on Germany, he rejoined the Army. He reached the rank of Major and served as an artillery officer in France. After the war he returned to the newspaper business. 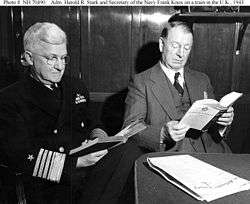 Admiral Harold R. Stark and Secretary Knox reading on a train in the United Kingdom in 1943

In 1930, Frank Knox became publisher and part owner of the Chicago Daily News. In the 1936 election, he was the Republican nominee for vice president under Alf Landon. Landon, Knox and former President Herbert Hoover were the only supporters of Theodore Roosevelt in 1912 to be later named to a Republican ticket. They lost in a landslide, winning just Maine and Vermont against the Democratic ticket of President Franklin D. Roosevelt and Vice President John Nance Garner.

During World War II, Knox again was an advocate of preparedness.[4] As an internationalist, he supported aid to the Allies and opposed isolationism. In July 1940, he became Secretary of the Navy under Franklin D. Roosevelt, part of the Democratic president's effort to build bi-partisan support for his foreign and defense policies following the defeat of France. Knox had called for the internment of Japanese Americans as early as 1933,[5] and he continued to do so in his new position. Shortly after Pearl Harbor, he visited Hawai'i to investigate the sabotage he believed to have taken place there; upon his return, he issued a public statement that "the most effective Fifth Column work of the entire war was done in Hawaii with the exception of Norway," and accused Japanese Hawaiians of impeding U.S. defense efforts in a report to the President. Although the FBI and military intelligence later disproved these claims, Knox continued to push for the incarceration of Japanese Americans and barred them from service in the navy during the war.[6]

When a new naval officer on Knox's staff told him "I'm no New Dealer", Knox replied "I fought the President with every resource at my command. But now I've squared my politics with my conscience and I'm proud to serve under such a great man. At that", Knox added, "it's a good thing to have a couple of fellows around here who aren't New Dealers!"[7] Knox carried out Roosevelt's plan to expand the Navy into a force capable of fighting in both the Atlantic and Pacific oceans. He traveled extensively to Navy installations worldwide.

Following a brief series of heart attacks, Secretary Knox died in Washington, D.C. on April 28, 1944 while still in office. He was buried on May 1, 1944 in Arlington National Cemetery with full military honors.[8]

On May 31, 1945 he received posthumously the Medal for Merit from President Harry S. Truman.[11] He also received the Spanish Campaign Medal and the World War I Victory Medal for his previous military service.

In 1948 his widow, Annie Reid Knox[8] endowed the Frank Knox Memorial Fellowships, which allow scholars from Australia, Canada, New Zealand, South Africa and the United Kingdom to pursue graduate study at Harvard University, or recent graduates of Harvard University to travel and research in commonwealth countries.[2]

Frank Knox School on the grounds of the Patuxent River Naval Air Station was named for him.

After the German massacre of civilians in the Czech village of Lidice in June 1942 in reprisal for the assassination of Reinhard Heydrich, Knox said

"If future generations ask us what we are fighting for [in World War Two], we shall tell them the story of Lidice."[8]

This article incorporates text in the public domain from the United States Department of the Navy.