From the 1860s until 1900, James G. Blaine rose as a dominant Republican figure. He was the Speaker of the U.S. House of Representatives, a U.S. Senator, and Secretary of State for three Republican administrations. He ran for President in 1884 but lost to Grover Cleveland. In the late 1800s, Thomas B. Reed served in the House of Representatives for three terms. He started many reforms and was sometimes referred to as "Czar Reed". "Reed's Rules of Order" are still used in Maine Legislatures.

Except for rare lapses, the Republicans dominated Maine politics until 1954, when young progressives from the Democratic Party gained strength.[1]

Margaret Chase Smith was the first American woman elected to serve in both houses of Congress (elected to the House of Representatives in 1940 and the Senate in 1948). In 1964, she was placed in the nomination for presidency at the Republican National Convention.[1]

On August 19, 2013, the resignation of seven members of the State Committee, viewed as libertarian and conservative, was announced along with their unenrollment from the Party. Those who resigned cited numerous grievances with the Party at both the state and national levels, including Party rule changes, support from Congressional Republicans of National Security Agency surveillance programs, and the failure of Legislative Republicans to block tax increases in the recently passed State budget.[2] 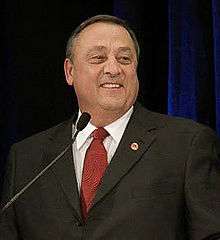 The Maine Republican Party caused a stir during its 2010 convention when the historically moderate party passed a constitutionally conservative platform supported by "Tea Party" activists. The new platform calls for the elimination of the United States Department of Education and the Federal Reserve System, the rejection of the United Nations Convention on the Rights of the Child (because it would give foreign entities control over U.S. citizens), a freeze and prohibition on stimulus spending, and the prosecution of perpetrators of the "global warming myth". It also demands a "return to the principles of Austrian Economics", and the assertion that healthcare is "not a right" but "a service" that can be addressed only by using "market based solutions". Indeed, the platform says, "The principles upon which the Republican Party was founded, to which we as Citizens seek return, and to which we demand our elected representatives abide, are summarized as follows:[5][6]

During the 2012 Maine caucuses, the Maine Republican Party received heavy criticism for mistakes and omissions in voter tallies.[7] The Waldo County GOP Committee called for a censure of Chairman Charlie Webster for his handling of the controversy.[8]