The Republican State Committee of Delaware is the affiliate of the United States Republican Party (GOP) in Delaware. Developed during the Civil War era, the GOP of Delaware remains one of the two biggest parties in Delaware. Famous Americans such as Thomas Coleman Dupont, John Williams, and J. Caleb Boggs all made their claim of fame serving the Republican Party in various state and federal positions. As of October 2015, its headquarters are in the College Square Shopping Center in Newark, Delaware.[1] As a party representing the three counties of Delaware, the party also has offices in other parts of the state as well. These regional offices are located in Dover, and Georgetown.[2]

History of the party

The Republican State Committee of Delaware got its start in the mid-1800s when the American Party (a group dedicated to prohibition of alcohol), People's Party, and former Whigs reformed under the Union Party. This party was dedicated to preserve the Union in the time of Lincoln's election. While Delaware did not secede from the Union, Delaware Democrats and other supporters often opposed Lincoln's policies.[3] The Republican party struggled to gain control in the state from 1865 to 1898 with the Democratic Party maintaining control of both the federal and state level of government. However, changes in industry and the arrival of immigrants in key locations would soon spell the rise of the Republican party in Delaware.

The RSC's first rise to prominence

With industry and business slowly overtaking agriculture in the state, the Republican Party in Delaware began to develop the support it needed to overthrow the long incumbent Democratic Party. However, the rise of the party was not complete without some controversial actions. As it was common in the era, the late 1800s was rife with voter corruption and illegal election techniques. One candidate, John Addicks, was infamous for attempting to buy a U.S. Senate seat by exploiting the rising party. Republicans in the state divided on the issue with Regular Republicans opposing Addicks while Union Republicans supported him.[4] Although Addicks didn't win election in 1899 or 1901, his corrupt tactics led to a vacation of the U.S. Senate seat for over ten years.[4] However, Addick's corruption proved to be only a small speed bump. With industry as a growing part of the Delaware economy, the Republican Party began to grow in popularity. With men such as Henry Du pont and T. Colemon Du pont (Both members of the famous industrial Du pont family) leading the way, the Republican Party quickly gained power in the state and various government positions. 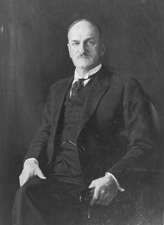 Thomas du Pont: U.S. Senator and key figure to the rise of the Delaware Republican Party

By 1915, Republicans controlled the Delaware Senate by a margin of 12 to 5 and the House by 23 to 10.[4] Governors of the state remained Republican candidates from 1897 up until 1936. With the exception of ratifying the 19th Amendment on a state level (once the U.S. Constitution accepted it, then Delaware did as well), the Republican majority in both the federal and state level dominated legislation until the mid-1930s.

Trading time with the Democrats

The modern era of the Republican Party of Delaware has largely consisted of the party trading off stretches of dominance with the opposing Democratic Party. Since World War II, the Republican party of Delaware has had its time of prominence and powerlessness. A great example of this is displayed in the form of the "Big Three" of Delaware politics during the mid-1900s. Two Republicans, John Williams and J. Caleb Boggs, compromised 2/3 of the "Big Three" in Delaware politics.[3] Williams would end up serving in the U.S. Senate from 1946 to 1971 while Boggs won seven statewide elections consisting of governor, U.S. House of Representatives, and U.S. Senate from 1947 to 1973. While Boggs and Williams dominated the federal sector of politics in Delaware, the third member of the "Big Three", Elbert N. Carvel, controlled the state sector and served as governor on two separate terms. Even with two powerful political figures in office, Carvel and the Democratic party provided enough competition to eventually turn back control of the Federal sector over to the Democrats. 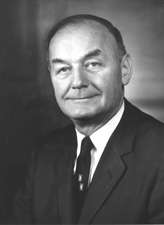 The control for the state of Delaware remains a similar battle today, with one party gaining control only to lose it to its opposition. From 1949 to 2008, the Republican party has held the position of Governor for 29 years compared to the 30 years held by Democrats.[4] Even more telling of this "time trading" is the governor position in recent years. Despite dominating the state Governor position from 1977 to 1993, the Republican Party has been unable to defeat its Democratic counterparts since then will all governor elections being won by Democrats since 1993. To this day, the Republican party remains gridlocked with the Democratic Party with neither side able to completely convert voters over to their side. 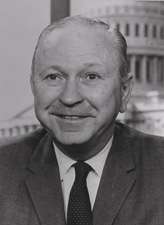 The Republican State Committee's official statement on their party's goal provides an all encompassing focus on both national and local issues. It states "The party's goal is to defend the principles of less government, more personal freedom and a strong national defense. Republicans believe that Delawareans do best when empowered to make decisions for themselves, and that businesses most need a fair, free and predictable regulatory framework in order to prosper and create jobs." [5] More detailed stances on policies are listed below.

National defense The RSC of Delaware believes in establishing peace through a strong defense. Strong homeland security, confronting terrorist and national threats, and maintaining a strong intelligence network all comprise this policy. The Republican Committee also believes in establishing international relations in the quest to establish peace. However, it also believes that the United States can and should act unilaterally when it deems necessary.[6]

Energy policies Energy independence is the major principal behind the party's policy. The Republican Committee of Delaware supports safe and affordable productions of energy that can be used to keep prices low and keep American running in a healthy fashion.[6]

Education America's future is another strong priority of the Delaware Republican Party. The party believes that "choice" in education and maintaining the quality of schools is a vital aspect of our society. Parents should have a choice in picking schools and the option to move their children to the system they believe will help them to succeed.[6]

Economy A free market economy is the basis of the Republican Committee of Delaware's platform. As one of the head industrial and corporate heavy states in America, it is important to avoid interventionist policies and let businesses grow in a health fashion. With sensible regulations and a free market system, the economy will be free to grow and provide a stable job basis for the state of Delaware.[6]

As of 2015, Republicans from Delaware hold none of the 3 seats in Congress. Delaware has two Senate seats and one House of Representative seat which are all currently held by Democrats. The state's at-large seat had long been held by moderate Republican Michael Castle until he vacated the seat to run for Senate in 2010, subsequently losing the primary to conservative activist Christine O'Donnell, who went on to lose the general election. His seat was subsequently won by Democrat John Carney, the state's then-Lieutenant Governor.

In 2015, Republicans control two of the six statewide elected offices.

In 2015, Republicans control nine State Senate seats .[7] State Senators must be citizens of the United State and have resided in Delaware for three years. Candidates must also have been a resident of their respective district for at least one year preceding their election. The age requirement to run for this elected seat is 27 years old.

In 2015, Republicans control 16 of the 41 State Assembly seats.[8] Any candidate running for the House of Representatives must have lived in Delaware for three years and be a U.S. Citizen. The candidate must also live in the district at least one year prior to running for office and be at least 24 years of age.