Varadharaja Perumal Temple or Hastagiri or Attiyuran is a Hindu temple dedicated to Lord Vishnu located in the holy city of Kanchipuram, Tamil Nadu, India. It is one of the Divya Desams, the 108 temples of Vishnu believed to have been visited by the 12 poet saints, or Alwars.[1] It is located in a suburb of Kanchipuram known as the Vishnu Kanchi that is a home for many famous Vishnu temples. One of the greatest Hindu scholars of Vaishnava VisishtAdvaita philosophy, Ramanuja is believed to have resided in this temple.[2] The temple along with Ekambareswarar Temple and Kamakshi Amman Temple in Kanchipuram is popularly known as Mumurtivasam (abode of trio),[3] while Srirangam is referred to as ‘ The Koil’ (meaning: "temple") and Tirupathi as the ‘Malai’ (Meaning: "hill"). Among the Divya Desams, Kanchipuram Varadaraja Perumal temple is known as the ‘Perumal Koil’. This is one of the most sacred places for Vaishnavites. There is another famous temple of Varadarajaswamy in Kurmai, of Palamaner mandal in Chittoor District of Andhra Pradesh, called the Kurma Varadaraja Swamy Temple.

Indra, the king of celestial deities, after getting released from the curse of Goddess Saraswati, installed the silver and golden lizards who were the witness of the ordeal.[4] Brahma performed a yagna here, which was about to be washed away by the fast flowing river Vedavathi. The temple deity, Vishnu laid himself flat to stay the flow and the yagna was successfully performed. Vishnu emerged with brilliance of thousand Suns as Devarajaswamy and stayed here permanently.[4] As is the case with the association of South Indian temples with a sacred tree, the name of the temple, Attigiri is derived from Atti tree, considered sacred to Vaishnavas.[5]

As per Hindu legend, Brahma, the Hindu god of creation, separated with his wife Saraswathi over a misunderstanding. He did a Aswameda worship (with a horse) seeking boons from Vishnu. Vishnu was pleased by the devotion and came out from under the earth as a boar and got Saraswathi unite with Brahma. As per another legend, Saraswathi cursed the king of celestial deities, Indra, to become an elephant and roam around the place. He was relived off the curse with the divine power of Vishnu, who appeared as the mount, Hastagiri. Attagiri indicates a mount in the form of elephant. As per another legend, the disciples of sage Gautama were cursed to become lizards. They resided in the temple and were relieved off the curse by the divine grace of Vishnu. There is a panel in the temple where the two lizards are depicted in the roof of the temple.[6]

Thirukkachi Nambigal(Also known as Kanchi Purnar) was an ardent devotee of this temple. He used to bring flowers everyday from Poovirundhavalli, where he maintained a garden. He did Aalavatta Kaingariyam, waving to produce breeze with the help of hand fan. It is believed that Vardharaja used to converse with him, while he was doing that seva. Aalavatta Kaingariyam is a worship practise followed in modern times also.

Nambi also composed Devarajaashtakam(A Sanskrit poem of 8 verses) on the presiding deity. Sri Ramanujar, another great Vaishnavite, got answers to his six questions from Lord Varadharaja through Sri Thirukkachi Nambigal.

There is a belief that the temple was first built by the Pallava king Nandivarman II.[7] Varadharaja Perumal Temple was originally built by the Cholas in 1053[8] and it was expanded during the reigns of the great Chola kings Kulottunga Chola I and Vikrama Chola. In the 14th century another wall and a gopura was built by the later Chola kings. When a Mughul invasion was expected in 1688, the main image of the deity was sent to Udayarpalayam, now part of Tiruchirapalli District.[9] It was brought back with greater difficulty after the involvement of local preceptor who enlisted the services of general Todarmal.[9] Robert Clive, the British general during the colonial period visited the Garuda seva festival and presented a valuable necklace (now termed Clive Maharkandi), which is adorned during a special occasion every year.[9] There are inscriptions dated 1532 CE (record 544 of 1919) indicating the gift of number of villages made by Achutaraya.[10] Vira Narasingaraya Saluva Nayaka who was directed by Achutaraya broke the royal order by giving more lands to Ekambaranathar temple than the Varadaraja Swamy temple against the instruction of an equal gift to either of the temples. Achutaraya on hearing this equally distributed the lands to both the temples.[10] In modern times, the administration is carried out by Hindu Religious and Endowment of the Government of Tamil Nadu.[11]

There are inscriptions dated 1532 CE (record 544 of 1919) indicating the gift of number of villages made by Achutaraya.[10] Vira Narasingaraya Saluva Nayaka who was directed by Achutaraya broke the royal order by giving more lands to Ekambaranathar temple than the Varadaraja Swamy temple against the instruction of an equal gift to either of the temples. Achutaraya on hearing this equally distributed the lands to both the temples.[10] There is a inscription from the 13th century from the Hoysalas, indicating a gift of a crown to the presiding deity. During the 17th century, the temple was under the attacks from Mughals headed by Aurangazeb. The idols of the temple were ported to Udayarpalayam in modern day Tiruchirapppali district during 1688. It was only during 1710 that the situation was ripe for the idols to be returned. But the chieftian of Udayarpalayam opposed the move and only after the intervention of Paramahamsa Parivajakacharya Attan Jeer, the idols were returned. The event is commemorated as a festival in the temple.[6] 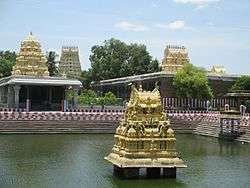 Images in the temple

The temple covers an area of 23-acre (93,000 m2) complex and shows the architectural skills of ancient Vishwakarma Sthapathis in temple architecture and is famous for its holiness and ancient history. The temple has three outer precincts (prakarams) namely Azhwar Prakaram, Madai Palli Prakaram and Thiru Malai Prakaram.[12] There are 32 shrines, 19 vimanams, 389 pillared halls (most having the lion type yali sculpture)[13] and sacred tanks some of which located outside the complex.[12][14]

The main sanctum faces west and can be entered through a 130 feet tall, 7-tiered rajagopuram (main gateway tower).[4] The hill, called Hastagiri, is 360 m (1,180 ft) long by 240 metres (790 ft).[15] The eastern gopuram is taller than the western gopuram, which is contrasting to large temples where the rajagopuram is the tallest one.[4] One of the most famous architectural pieces in the temple is the huge stone chain sculpted in a single stone.[16] There is a 100 pillared hall[17] which has sculptures depicting Ramayana and Mahabaratha. It is a masterpiece of Vijayanagara architecture.[12][16]

Hastagiri has murals of the late Vijayanagara empire on the ceiling.[12] Another significant features of the temple are beautifully carved lizards and gilded with gold, over the sanctum.[16][18] The vimana over the sanctum of Varadaraja Swami is called Punyakoti Vimanam and the one over Perundevi Thayar shrine is called Kalyana Koti Vimanam.[4]

Apart from the main stone idol, the temple has the wooden image of Varadarajaswamy preserved within a silver box from which water is pumped out every 40 years.[19] It is kept back in the silver casket and immersed in the water. It is believed that there is a heavy downpour after the idol is immersed to fill the tank. The presiding deity is a 10 ft (3.0 m) tall idol made of granite in standing posture, while Thayar is a 4 ft (1.2 m) image in sitting posture.[6] There is a shrine of Narasimha on the hillock.[12] The origin of the mask of Narasimha is mysterious and believed to possess inexplicable powers.[20]

In the second precinct downstairs contains four shrines, of which the important one is of Malayala Nachiar (Kerala consort), presumably built during the Chera kings in the early 14th century.[12] There are images of Azhwars and Ramanuja in the second precinct.[15]

The third precinct has the shrine of Goddess Perundevi Thayar; it is customary for devotees to visit the shrine first before visiting the main Perumal shrine.[9] There are four small pillared halls, identical in structure, called Thulabara Mandapas built during the 1532 for a ceremony of Achutaraya of the Vijayanagara empire.[9]

The seven precincts are called Pradakshina Padha, Hastagiri Pradakshana, Madapalli Pragara, Alavandar Pragara and Azhwar Thiruveedhi. The Alavandar Pragara houses lot of shrines of the temple. The temple has two towers on the eastern and western sides, which are 180 ft (55 m) and 160 ft (49 m) tall respectively. There is a hundred pillared hall, which has ornate carvings, notable of which being a stone chain. The temple car is believed to have been donated by Krishnadeva Raya in 1517 CE. There are paintings in the temple commissioned during the 16th century during the rule of Vijayanagar kings.[6]

There is a shrine of Chakratazhwar on the eastern side of the temple tank. The image of Chakrathazwhar (Sudarsana) in the temple is depicted with six hands. There festival image of the temple has seven different images of Sudarshana depicted within the same Chakra. There are two entrances to the shrine as the two images are considered to be separate. The shrine is believed to have been constructed during the time of Kulothunga III during 1191 CE by Ilavazhagan Kalingarayan of Nettur as seen from the inscriptions in the temple. The later additions are presumably made by Vijayanagar Empire during the 13th or early part of 14th century. The kings also added pillared columns in the leading hall sculpted with figures from Ramayana and various forms of Vishnu.[21] 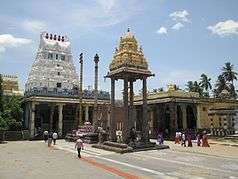 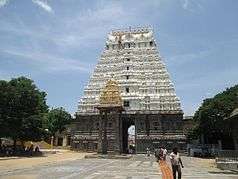 Thirumangai Azhwar spent all his wealth and taxes towards the building of the temple and the king punished him for not paying the taxes and losing wealth of the kingdom. A divine voice informed the king in his dreams that he can pickup wealth from a nearby place and relieve Thirumangai Azhwar. Thirukachi Nambi was an ardent devotee of Varadrajar. He used to come a long way everyday to the temple to offer his worship. During his old age, he was priviliged to converse with god. Ramanuja, the preceptor of Vaishanadvaita philosophy, was tricked by his master and was plotted to be killed. But by the grace of divinity, he was masked as a hunter and escape the event. He later came back to the temple to the making of the Vaishava philosophy.[6]

Vedanta Desika, the revered polymath next only to Ramanuja mentions the annual ten-day festival celebrated in May.[9] In one of the verses, he graces the deity as under.

"He is the single root-source for this entire universe,
beginning with space, and all other elements;
like the pupil in the eye of the Vedas."[22]

Vedanta Desika, ( of Thooppul) visits Varadaraja Perumal once a year during the month of Puratasi(Sept-Oct). This is the only Divya Desam, where Desikar enters the Sanctum of Lord Varadaraja. No other Azhvaar has this privilege

The temple also finds mention in the Thirtha Prabandha, a travelogue with descriptions of pilgrim centers throughout India written by Sri Vadiraja Swamy.

The temple is famous for its huge umbrella used during festive occasions. During the bhramotsavam (major festival) in Vaigasi (May/June), thousands of people throng the temple and that increases at least by a two-fold during the Garuda Vahanam and the Ther festival (temple chariot).

The priests of the temple are believed to be the descendants of Yagya Valkier.[6]