Sthalasayana Perumal Temple (also called Thirukadalmallai) is at Mahabalipuram. Constructed in the Dravidian style of architecture, the temple is glorified in the Divya Prabandha, the early medieval Tamil canon of the Azhwar saints from the 6th–9th centuries AD. It is one of the 108 Divyadesam dedicated to Vishnu, who is worshipped as Sthalasayana Perumal and his consort Lakshmi as Nilamangai Thayar. The temple is believed to have been built by Pallavas, with later contributions from Medieval Cholas, Vijayanagar kings and Madurai Nayaks.

The temple is believed to be the birthplace of the Vaishnava Azhwar saint Bhoothathalvar. Sthalasayana Perumal is believed to have appeared to sage Pundarika. The temple is open from 6 am to 12 pm and 3pm to 8:30 pm and Six daily rituals and a dozen yearly festivals are held at the temple, of which the Bhoothatazhwar Avata festival, celebrated during the Tamil month of Aipasi (October–November) being the most prominent. The temple is one of the 32 Group of Monuments at Mahabalipuram that are declared as UN world heritage sites, but unlike others that are maintained by the Archaeological Survey of India, the temple is maintained and administered by the Hindu Religious and Endowment Board of the Government of Tamil Nadu.

As per Hindu legend, once sage Pundarika was performing penance worshipping Vishnu at this place. He collected Tamarasa flowers and submitted it to view Vishnu in Ksirabdhi Natha form, his posture in Tirupaarkadal. He collected 1,008 flowers and in his intensity, he scooped out water also in full. Vishnu came in disguise in the form of sage and asked him for food. The sage went to acquire food for the old man, but while returning he found that Vishnu remained in the place. Since Vishnu stayed in this place, he was called Sthalasayana Perumal.[1][2] The legend is sanctified by Bhoothatazhwar in his verses in Nalayira Divya Prabandham.[3]

As per another legend, a king by name Harikesarivarman used to visit the Nithyakalyana Perumal temple at Thiruvidandai everyday from Mahabalipuram and wanted to settle there. Vishnu was pleased by his devotion and appeared as Sthalasayana Perumal at Mahabalipuram.[4] 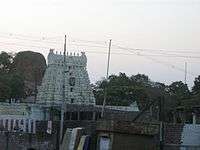 The temple stands on the shore and it was built along with the other sculptures. It is a small temple with two major Shrines for Lord Sthalasayana Perumal and Nilamangai Thayaar. This is believed to be the birthplace of Bhoothathazhwar, the 2nd Azhwar. There is also a separate shrine for Lord Narasimha. The architecture depicts the Pallava style. This shrine was built by Pallava kings. Bhoothathazhwar was found in a tank that is opposite to the temple. The place is also famous for its Adivaraha shrine near the seashore, where the Lord is known as "Valavendai Gnanapiran" or the Lord having His Consort on His right side unlike other places with His Consort on the left side like the nearby Thiruvidaventhai divyadesam. It is believed that there were originally seven temples built in the place, out of which only one is remaining. The festival deity is sported with a lotus bud in the hand, while the presiding deity is seen displaying Jnana Mudra.[1] During the 14th century, the Vijayanagar king Parankusa shifted the temple to its current location away from the shore. He is believed to have built the four Mada streets around the temple.[2] The temple also had expansions by Chola king Vikrama Chola (1118-35 CE) during 1120 CE.[5] 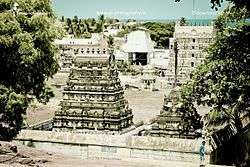 Image of the temple from hilltop

The temple priests perform the pooja (rituals) during festivals and on a daily basis. As at other Vishnu temples of Tamil Nadu, the priests belong to the Vaishnavaite community, a Brahmin sub-caste. The temple rituals are performed six times a day: Ushathkalam at 7 a.m., Kalasanthi at 8:00 a.m., Uchikalam at 12:00 p.m., Sayarakshai at 6:00 p.m., Irandamkalam at 7:00 p.m. and Ardha Jamam at 10:00 p.m. Each ritual has three steps: alangaram (decoration), neivethanam (food offering) and deepa aradanai (waving of lamps) for both Sthalasayana Perumal and Nilamangai Thayar. During the last step of worship, nagaswaram (pipe instrument) and tavil (percussion instrument) are played, religious instructions in the Vedas (sacred text) are recited by priests, and worshippers prostrate themselves in front of the temple mast. There are weekly, monthly and fortnightly rituals performed in the temple.[6]

Puliyodharai (Tamarind Rice), Dhadhyonam (Curd Rice), Pongal, Chakkarai Pongal, Vada, Adhirasam, Murukku are offered to Lord as Prasadam. Maasi Makham is an important festival. The Uthsava idol in the temple, known as "Ulaguyya Nindra Piran" along with His Consorts, and those of Valavendai Gnanapiran or Adivaraha and Sri Rama from nearby Padavedu temple, will be taken in procession to the seashore at Mahabalipuram where special Poojas will be performed and "Theerthavari" are offered. Bhoothatalwar's Avathara Utsavam is also an important festival.

Bhoothathazhwar Avata Utsavam, the birth anniversary of Bhoothatazhwar is celebrated every year during the Tamil month of Aipasi (October - November). At around 10 am on the festival day, the festival image of the Azhwar is brought in a palanquin to the shrine of Nilamangai Thayar and then to Stalasayana Perumal. After recital of Periyathirumozhi of Thirumangai Azhwar, Kaithala Seva, a practise of providing a special gift to Bhoothathazhwar is performed. Bhootathazhwar also makes a trip to the Cave temple of Mahabalipuram. During the evening, the festival images of the presiding deity of Stalasayana Perumal and Bhoothatazhwar is taken around the streets of the temple.[2]

The temple is revered in Nalayira Divya Prabandham, the 7th–9th century Vaishnava canon, by Thirumangai Azhwar and Bhoothathazhwar in one hymn each. The temple is classified as a Divyadesam, one of the 108 Vishnu temples that are mentioned in the book.[6] Thirumangai Azhwar considers the reclining form of Vishnu special as it is the only place where he reclines in ground without his traditional snake Adiseshan.[2]

The temple is one of the 32 Group of Monuments at Mahabalipuram that are declared as UN world heritage sites, but unlike others that are maintained by the Archaeological Survey of India (ASI), the temple is maintained and administered by the Hindu Religious and Endowment Board of the Government of Tamil Nadu. ASI had a proposal to bring the maintenance of the temple under its jurisdiction in July 2012. Following widespread protest by locals and shopkeepers the proposal was dropped by the central ministry of Culture in September 2013.[5]