Ashtabujakaram located in Kanchipuram in the South Indian state of Tamil Nadu, is dedicated to the Hindu god Vishnu. Constructed in the Dravidian style of architecture, the temple is glorified in the Divya Prabandha, the early medieval Tamil canon of the Azhwar saints from the 6th–9th centuries AD. It is one of the 108 Divyadesam dedicated to Vishnu, who is worshipped as Ashta Bhuja Perumal and his consort Lakshmi as Alamelumangai.

The temple is believed to have been built by the Pallavas of the late 8th century AD, with later contributions from Medieval Cholas and Vijayanagar kings. The temple has three inscriptions on its walls, two dating from the period of Kulothunga Chola I (1070–1120 CE) and one to that of Rajendra Chola (1018-54 CE). A granite wall surrounds the temple, enclosing all the shrines and two bodies of water. There is a four-tiered rajagopuram, the temple's gateway tower, in the temple.

Six daily rituals and three yearly festivals are held at the temple. The temple is maintained and administered by the Hindu Religious and Endowment Board of the Government of Tamil Nadu. 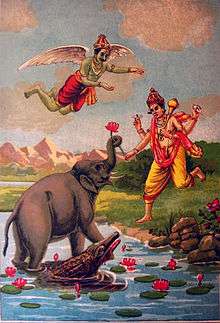 As per Hindu legend, once there was an argument between Saraswathi, the consort of Brahma and Lakshmi on superiority. They went to Indra, the king of celestial deities. Indra judged Lakshmi as superior and not satisfied with his argument, Saraswathi went to her husband, Brahma. He also chose Lakshmi to be the superior one. Saraswathi was unhappy with the decision and decided to stay away from Brahma. Brahma did a severe penance praying to Vishnu and did an Aswametha Yagna. Saraswathi was still angry that the yagna, which usually is done along with consorts was done alone by Brahma. She tried to disrupt the penance in various ways, but Vishnu interfered in all her attemptes. After all the demons were killed by Vishnu, who were sent by Saraswati to destroy the yagna(penance) done by Brahma, she finally sent a ferocious Sarpam(snake). Lord Vishnu took the form of Ashtabhuja Perumal holding eight different weapons to kill the snake. The snake is found on the Vaayu end of the yaaga sala as "Sarabeswaran" in this temple.[1][2][3]

Another legend associates this temple to Gajendra moksham given by Vishnu to the elephant king Gajendra. As per the legend, the elephant Gajendra, used to worship Vishnu with the lotus fetched from the temple tank everyday. Once while picking up lotus, a crocodile caught the leg of Gajendra, who started calling the name of Vishnu for help. Vishnu sent his discus to punish the crocodile and relieve the elephant.[1]

Shrines of the temple

Ashtabhujakaram temple is located in Vishnu Kanchi or Chinna Kanchipuram in Hodgosonpet, located 2 km (1.2 mi) away from Varadaraja Perumal Temple. The temple is a small one with a tank in front and has a three-tiered gopuram (gateway tower) that pierces the concentric rectangular walls. The presiding deity of the temple is Astabhuja Perumal facing West, whose image in the central shrine is sported with eight hands. The eight hands are sported to have a sword, shield, mace, bow, arrow, lotus, conch and chakra. He is seen having Mahalakshmi in his chest and sported with a garland made of Saligrama. There is a separate shrine for Pushpakavalli Thayar, the consort of Perumal. There is a four pillared hall named Friday Mandapam in front of the shrine. It is customary to worship Thayar before proceeding to the worship of Perumal. There is a shrine for Varaha Perumal in the complex, who is sported in seated posture under the hoods of two serpents.[3] The temple also has shrines dedicated to Hanuman, Alwars, Andal, Chakra and Sarabeswara. The temple tank, Gajendra Pushkarani, is located outside the entrance tower.[4]

The temple is revered in Nalayira Divya Prabandham, the 7th–9th century Vaishnava canon, by Pey Azhwar and Thirumangai Azhwar in one hymn. The temple is classified as a Divyadesam, one of the 108 Vishnu temples that are mentioned in the book. The temple is one of the 14 Divyadesams in Kanchipuram.[5] The temple is believed to be the place where Brahma performed penance seeking the wishes of Vishnu and one of the few places where Brahma worshiped Vishnu.[4][6] The temple is counted one among the four temples in Kanchipuram that include Yathothkari Perumal Temple, Deepaprakasa Perumal temple and Varadaraja Perumal Temple where the legend of Brahma performing penance is associated.[4] The temple is also revered in the verses of Manavala Maamunigal, Vedanata Desikar and Pillai Perumal Iyengar.[4] 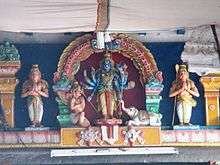 Stucco image of the deity sported with eight hands

The temple priests perform the pooja (rituals) during festivals and on a daily basis. As at other Vishnu temples of Tamil Nadu, the priests belong to the Vaishnavite community, a Brahmin sub-caste. The temple rituals are performed six times a day: Ushathkalam at 7 a.m., Kalasanthi at 8:00 a.m., Uchikalam at 12:00 p.m., Sayarakshai at 6:00 p.m., Irandamkalam at 7:00 p.m. and Ardha Jamam at 10:00 p.m. Each ritual has three steps: alangaram (decoration), neivethanam (food offering) and deepa aradanai (waving of lamps) for both Govindarajan and Pundarikavalli. During the last step of worship, nagaswaram (pipe instrument) and tavil (percussion instrument) are played, religious instructions in the Vedas (sacred text) are recited by priests, and worshipers prostrate themselves in front of the temple mast. There are weekly, monthly and fortnightly rituals performed in the temple. The 10-day Vaikunta Ekadasi festival celebrated during the Tamil month of Chittirai (December - January) is the most prominent festival celebrated in the temple. Rama Navami and Navarathri are other prominent festivals celebrated in the temple.[5] Gajendra Moksha festival is celebrated during the Tamil month of Aadi (July - August) in the star of Hastham.[3]