Lyrics in sheet music. This is a homorhythmic (i.e., hymn-style) arrangement of a traditional piece entitled "Adeste Fideles", in standard two-staff format for mixed voices.

Lyrics are words that make up a song usually consisting of verses and choruses. The writer of lyrics is a lyricist. The words to an extended musical composition such as an opera are, however, usually known as a "libretto" and their writer, as a "librettist". The meaning of lyrics can either be explicit or implicit. Some lyrics are abstract, almost unintelligible, and, in such cases, their explication emphasizes form, articulation, meter, and symmetry of expression. Rappers can also create lyrics with a variation of rhyming words or words that create and tell a story or song. 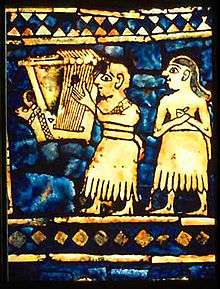 "Lyric" derives via Latin lyricus from the Greek λυρικός (lyrikós),[1] the adjectival form of lyre.[2] It first appeared in English in the mid-16th century in reference, to the Earl of Surrey's translations of Petrarch and to his own sonnets.[3] Greek lyric poetry had been defined by the manner in which it was sung accompanied by the lyre or cithara,[4] as opposed to the chanted formal epics or the more passionate elegies accompanied by the flute. The personal nature of many of the verses of the Nine Lyric Poets led to the present sense of "lyric poetry" but the original Greek sense—words set to music—eventually led to its use as "lyrics", first attested in Stainer and Barrett's 1876 Dictionary of Musical Terms.[5] Stainer and Barrett used the word as a singular substantive: "Lyric, poetry or blank verse intended to be set to music and sung". By the 1930s, the present use of the plurale tantum "lyrics" had begun; it has been standard since the 1950s.[1] The singular form "lyric" still appears; its present use, however, is to refer to a specific phrase within a song's lyrics.

The differences between poem and song may become less meaningful where verse is set to music, to the point that any distinction becomes untenable. This is perhaps recognised in the way popular songs have lyrics.

However, the verse may pre-date its tune (in the way that "Rule Britannia" was set to music, and "And did those feet in ancient time" has become the hymn "Jerusalem"), or the tune may be lost over time but the words survive, matched by a number of different tunes (this is particularly common with hymns and ballads).

Analogously, verse drama might normally be judged (at its best) as poetry, but not consisting of poems (see dramatic verse).

In Baroque music, melodies and their lyrics where prose. Rather than paired lines they consist of rhetorical sentences or paragraphs consisting of an opening gesture, an amplification (often featuring sequence), and a close (featuring a cadence); in German Vordersatz-Fortspinnung-Epilog.[6] For example:

Currently, there are many websites featuring song lyrics. This offering, however, is controversial, since some sites include copyrighted lyrics offered without the holder's permission. The U.S. Music Publishers' Association (MPA), which represents sheet music companies, launched a legal campaign against such websites in December 2005, the MPA's president, Lauren Keiser, said the free lyrics web sites are "completely illegal" and wanted some website operators jailed.[9]

Lyrics can be studied from an academic perspective. For example, some lyrics can be considered a form of social commentary. Lyrics often contain political, social, and economic themes—as well as aesthetic elements—and so can communicate culturally significant messages. These messages can be explicit, or implied through metaphor or symbolism. Lyrics can also be analyzed with respect to the sense of unity (or lack of unity) it has with its supporting music. Analysis based on tonality and contrast are particular examples. Former Oxford Professor of Poetry Christopher Ricks famously published Dylan's Visions of Sin, an in-depth and characteristically Ricksian analysis of the lyrics of Bob Dylan; Ricks gives the caveat that to have studied the poetry of the lyrics in tandem with the music would have made for a much more complicated critical feat.

A 2009 report published by McAfee found that lyrics-related searches and searches containing the word "free" are the most likely to have risky results from search engines, both in terms of average risk of all results, and maximum risk of any result.[13]