Reverberation, in psychoacoustics and acoustics, is the persistence of sound after a sound is produced.[1] A reverberation, or reverb, is created when a sound or signal is reflected causing a large number of reflections to build up and then decay as the sound is absorbed by the surfaces of objects in the space – which could include furniture, people, and air.[2] This is most noticeable when the sound source stops but the reflections continue, decreasing in amplitude, until they reach zero amplitude.

Reverberation is frequency dependent: the length of the decay, or reverberation time, receives special consideration in the architectural design of spaces which need to have specific reverberation times to achieve optimum performance for their intended activity.[3] In comparison to a distinct echo that is a minimum of 50 to 100 ms after the initial sound, reverberation is the occurrence of reflections that arrive in less than approximately 50 ms. As time passes, the amplitude of the reflections is reduced until it is reduced to zero. Reverberation is not limited to indoor spaces as it exists in forests and other outdoor environments where reflection exists.

Reverberation occurs naturally when a person sings, talks or plays an instrument acoustically in a hall or performance space with sound-reflective surfaces.[4] The sound of reverberation is often electronically added to the vocals of singers in live sound systems and sound recordings by using effects units or digital delay effects.

Sound level in a reverberant cavity excited by a pulse, as a function of time (very simplified diagram).

The time it takes for a signal to drop by 60 dB is the reverberation time.

RT60 is the time required for reflections of a direct sound to decay 60 dB. Reverberation time is frequently stated as a single value, if measured as a wide band signal (20 Hz to 20 kHz), however, being frequency dependent, it can be more precisely described in terms of frequency bands (one octave, 1/3 octave, 1/6 octave, etc.). Being frequency dependent, the reverberation time measured in narrow bands will differ depending on the frequency band being measured. For precision, it is important to know what ranges of frequencies are being described by a reverberation time measurement.

In the late 19th century, Wallace Clement Sabine started experiments at Harvard University to investigate the impact of absorption on the reverberation time. Using a portable wind chest and organ pipes as a sound source, a stopwatch and his ears, he measured the time from interruption of the source to inaudibility (a difference of roughly 60 dB). He found that the reverberation time is proportional to room dimensions and inversely proportional to the amount of absorption present.

The optimum reverberation time for a space in which music is played depends on the type of music that is to be played in the space. Rooms used for speech typically need a shorter reverberation time so that speech can be understood more clearly. If the reflected sound from one syllable is still heard when the next syllable is spoken, it may be difficult to understand what was said.[5] "Cat", "Cab", and "Cap" may all sound very similar. If on the other hand the reverberation time is too short, tonal balance and loudness may suffer. Reverberation effects are often used in studios to add depth to sounds. Reverberation changes the perceived spectral structure of a sound, but does not alter the pitch.

Sabine's reverberation equation was developed in the late 1890s in an empirical fashion. He established a relationship between the RT60 of a room, its volume, and its total absorption (in sabins). This is given by the equation:

is the speed of sound in the room (for 20 degrees Celsius),

is the volume of the room in m³,

is the average absorption coefficient of room surfaces, and the product

is the total absorption in sabins.

The total absorption in sabins (and hence reverberation time) generally changes depending on frequency (which is defined by the acoustic properties of the space). The equation does not take into account room shape or losses from the sound travelling through the air (important in larger spaces). Most rooms absorb less sound energy in the lower frequency ranges resulting in longer reverb times at lower frequencies.

The reverberation time RT60 and the volume V of the room have great influence on the critical distance dc (conditional equation):

is measured in meters, volume

is measured in m³, and reverberation time

is measured in seconds.

Sound absorption coefficients of common materials used in buildings are presented in this table. 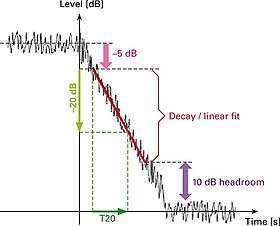 Historically reverberation time could only be measured using a level recorder (a plotting device which graphs the noise level against time on a ribbon of moving paper). A loud noise is produced, and as the sound dies away the trace on the level recorder will show a distinct slope. Analysis of this slope reveals the measured reverberation time. Some modern digital sound level meters can carry out this analysis automatically.[6]

Several methods exist for measuring reverb time. An impulse can be measured by creating a sufficiently loud noise (which must have a defined cut off point). Impulse noise sources such as a blank pistol shot or balloon burst may be used to measure the impulse response of a room.

A two port measurement system can also be used to measure noise introduced into a space and compare it to what is subsequently measured in the space. Consider sound reproduced by a loudspeaker into a room. A recording of the sound in the room can be made and compared to what was sent to the loudspeaker. The two signals can be compared mathematically. This two port measurement system utilizes a Fourier transform to mathematically derive the impulse response of the room. From the impulse response, the reverberation time can be calculated. Using a two port system allows reverberation time to be measured with signals other than loud impulses. Music or recordings of other sound can be used. This allows measurements to be taken in a room after the audience is present.

Reverberation time is usually stated as a decay time and is measured in seconds. There may or may not be any statement of the frequency band used in the measurement. Decay time is the time it takes the signal to diminish 60 dB below the original sound. It is often difficult to inject enough sound into the room to measure a decay of 60 dB, particularly at lower frequencies. If the decay is linear, it is sufficient to measure a drop of 20 dB and multiply the time by 3, or a drop of 30 dB and multiply the time by 2. These are the so-called T20 and T30 measurement methods.

The concept of Reverberation Time implicitly supposes that the decay rate of the sound is exponential, so that the sound level diminishes regularly, at a rate of so many dB per second. It is not often the case in real rooms, depending on the disposition of reflective, dispersive and absorbing surfaces. Moreover, successive measurement of the sound level often yields very different results, as differences in phase in the exciting sound build up in notably different sound waves. In 1965, Manfred R. Schroeder published "A new method of Measuring Reverberation Time" in the Journal of the Acoustical Society of America. He proposed to measure, not the power of the sound, but the energy, by integrating it. This made it possible to show the variation in the rate of decay, and to free acousticians from the necessity of averaging many measurements.

A performer or a producer of live or recorded music often induces reverberation in a work. Several systems have been developed to produce or to simulate reverberation.

The first reverb effects created for recordings used a real physical space as a natural echo chamber. A loudspeaker would play the sound, and then a microphone would pick it up again, including the effects of reverb. Although this is still a common technique, it requires a dedicated soundproofed room, and varying the reverb time is difficult.

A plate reverb system uses an electromechanical transducer, similar to the driver in a loudspeaker, to create vibrations in a large plate of sheet metal. The plate’s motion is picked up by one or more contact microphones whose output is an audio signal which may be added to the original "dry" signal. In the late 1950s, Elektro-Mess-Technik (EMT) introduced the EMT 140;[7] a 600-pound (270 kg) model popular in recording studios, contributing to many hit records such as Beatles and Pink Floyd albums recorded at Abbey Road Studios in the 1960s, and others recorded by Bill Porter in Nashville's RCA Studio B. Early units had one pickup for mono output, later models featured two pickups for stereo use. The reverb time can be adjusted by a damping pad, made from framed acoustic tiles. The closer the damping pad, the shorter the reverb time. However, the pad never touches the plate. Some units also featured a remote control.

The folded coil spring is visible underside of the reverberation device.

A spring reverb system uses a transducer at one end of a spring and a pickup at the other, similar to those used in plate reverbs, to create and capture vibrations within a metal spring. Laurens Hammond was granted a patent on a spring-based mechanical reverberation system in 1939.[8] Guitar amplifiers frequently incorporate spring reverbs due to their compact construction and low cost. Spring reverberators were once widely used in semi-professional recording due to their modest cost and small size.

Many musicians have made use of spring reverb units by rocking them back and forth, creating a thundering, crashing sound caused by the springs colliding with each other. The Hammond Organ included a built-in spring reverberator, making this a popular effect when used in a rock band.

Digital reverberators use various signal processing algorithms in order to create the reverb effect. Since reverberation is essentially caused by a very large number of echoes, simple reverberation algorithms use several feedback delay circuits to create a large, decaying series of echoes. More advanced digital reverb generators can simulate the time and frequency domain response of a specific room (using room dimensions, absorption and other properties). In a music hall, the direct sound always arrives at the listener's ear first because it follows the shortest path. Shortly after the direct sound, the reverberant sound arrives. The time between the two is called the "pre-delay."

Convolution reverb is a process used for digitally simulating reverberation. It uses the mathematical convolution operation, a pre-recorded audio sample of the impulse response of the space being modeled, and the sound to be echoed, to produce the effect. The impulse-response recording is first stored in a digital signal-processing system. This is then convolved with the incoming audio signal to be processed.