Fort Thomas is a home rule-class city[1] in Campbell County, Kentucky, United States, on the southern bank of the Ohio River and the site of an 1890 US Army post. The population was 16,325 at the 2010 census, making it the largest city in Campbell County and it is officially part of the Cincinnati – Northern Kentucky metropolitan area. 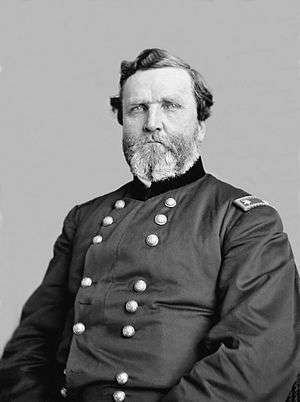 George Thomas, for whom the city was named.

Evidence suggests that on or around 1749, prior to settlement by Europeans, a large battle occurred between a band of Cherokee Native Americans and victorious Miami tribe and Shawnee tribe Native Americans in what is now the city of Fort Thomas. As many as 600 graves of slain warriors have been unearthed by archeologists there; although the battleground area has been thoroughly combed for artifacts and remains over the years, it is still not uncommon to find arrowheads and other artifacts from the past while gardening or hiking the woods and streambeds throughout the city.

In 1887, a site was needed to house a United States Army post to replace Newport Barracks located in the adjoining city of Newport, Kentucky. Built in 1803, Newport Barracks replaced the smaller Fort Washington, located across the Ohio River in Cincinnati, Ohio. That army post was located at the junction of the Licking and Ohio Rivers, but it was prone to flooding and flooded numerous times during the early 1880s. A new, less flood prone location was sought.

General Philip Sheridan personally selected 11 acres (45,000 m2) of the city and dubbed the area the Highlands, predicting it to become the "West Point of the West." The new post was named Fort Thomas in honor of General George Henry Thomas.

The area has many remnants of this era with a 102-foot (31 m) high Stone Water Tower as a familiar landmark which stands at the entrance to Tower Park. It was the 16th structure built on the grounds of the Military Reservation. It encloses a standpipe which has a capacity of 100,000 gallons, pumped from the Water District reservoirs just across South Fort Thomas Avenue. In 1890 when the military base was established, such provisions for water supply was necessary as there was no other water tower in this area. Cannons that were captured in Cuba's Havana Harbor during the Spanish–American War rest on stone platforms in front of the Tower. The dates marked on these cannons, reflecting the date they were made in Barcelona, Spain, are "1768" and "1769."

The U.S. 6th Infantry Regiment moved to Fort Thomas, where it remained until called to action again in June 1898, in the Spanish–American War.

Samuel Woodfill was transferred to the Fort Thomas Army post in 1912. He married Lorena Wiltshire on Christmas Day in 1917 and they purchased a house near the fort. In World War I he was courageous, leading his men against the Germans. His bravery earned him many medals and awards and he was described as the most decorated soldier of the war. In civilian life, however, he struggled to pay his bills. He was unsuccessful at creating an orchard, and worked as a carpenter, a watchman and a guard. His wife died in March, 1942, but two months later, the Army commissioned Woodfill and another World War I hero, Alvin C. York as Majors to build morale and promote enlistments. Woodfill retired again in 1944, but memories of his wife in Fort Thomas caused him to return to Indiana, where he was born.

On February 25, 1937, Paul Tibbets enlisted here as a flying cadet in the United States Army Air Corps. During the last days of World War II, Paul became known as the pilot that dropped the first atomic bomb on August 6, 1945.

Fort Thomas served as a depot, induction center, and military hospital. Most of the garrison was transferred to the Veterans Administration in 1946, but military activities continued until the fort was closed in 1964.

Fort Thomas is located within a climatic transition zone at the extreme northern limit of the humid subtropical climate. The local climate is a basically a blend of the subtropics to the south and the humid continental climate to the north. There are several "micro-climates" found in Fort Thomas which produce warmer than usual or cooler than usual "pockets". In the warmer niches it is not at all uncommon to find such "subtropical" novelties as the common wall lizard, the Southern magnolia (Magnolia grandiflora), and even the rare Needle palm; Blue spruce and Salamander tend to occur in the cooler and shaded niches. Moderating variables for the overall climate of Fort Thomas include: the Ohio River, the region's relatively large hills and valleys, and an urban heat influence due to the proximity of the Cincinnati/Northern Kentucky (Covington, Newport, etc.) metropolitan area. Fort Thomas is located within the Bluegrass region of Kentucky and Southern Ohio and is also situated within the northern periphery of the Upland South.

There were 6,787 households out of which 30.1% had children under the age of 18 living with them, 48.8% were married couples living together, 9.7% had a female householder with no husband present, and 37.8% were non-families. 32.6% of all households were made up of individuals and 12.5% had someone living alone who was 65 years of age or older. The average household size was 2.35 and the average family size was 3.03.

Highlands High School is ranked in the top 550 in the United States by US News & World Report.

The mascot for Highlands is the bluebird. According to local legend, in the early twentieth century the original mascot for the school was the Highlands Blue Devil. A local clergyman objected to the association of the community to the devil. At the time, the boys' track team had an exceptionally good year and it was remarked that they "flew like birds." This gave rise to the new and current mascot.

The Highlands football program is one of the most storied in all of Kentucky. Highlands has won 20 official state football championships and three "mythical" state titles prior to Kentucky instituting a statewide playoff system. The Bluebirds currently rank second in the state and fifth in the entire nation in total number of wins. Current NFL free agent Jared Lorenzen starred in football at Highlands. He signed as a free-agent with the Giants after attending the University of Kentucky. Michael Mitchell, who was drafted in 2009 by the Oakland Raiders with the 47th pick, played football at Highlands. Ben Guidugli, who was also a member of Highlands Football, played TE at the University of Cincinnati and was picked up as free agent by the St. Louis Rams in 2011.

The school has twice won three consecutive girls' cross country championships in 1978–1980 and 2002–2004 and has won back to back girls' soccer championships (2005–2006). The boys and girls soccer teams were State Runner-up in 2008, the first time in state history both teams made the finals from one school. The girls' track team won consecutive state championships in 2008 and 2009.

The Highlands band, has also received recognition. The marching band placed sixth in the KMEA State semi-finals competition in November 2005. They also achieved 5th place in November 2009, only missing Finals by a quarter of a point. In May 2007, the concert band received a distinguished rating, the highest, in the Kentucky State Concert Band Festival at the University of Louisville.

There are two Catholic private schools in the city, Saint Thomas Elementary and Saint Catherine Elementary. 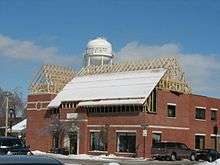 Fort Thomas has undergone numerous changes over the years. A recent push has renovated downtown Fort Thomas, which is centered around the intersection of Fort Thomas Avenue and Highland Avenue. This business district contains the municipal building, fire department, police station, as well as several shops, banks, and other businesses.

Fort Thomas has a secondary business district known as Midway, located adjacent to the former Army post and named after the Midway carnival at the 1893 World's Columbian Exposition in Chicago. As of 2010, the Midway district is undergoing streetscaping improvements similar to those performed in the downtown area.

Fort Thomas is situated on the southern border of the Ohio River, directly opposite of Cincinnati, Ohio. Therefore, the major media market for the city is Cincinnati. Fort Thomas then uses Cincinnati's television and radio outlets.