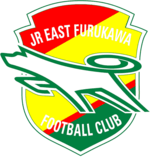 JEF United Ichihara Chiba, also known by JEF United Chiba (ジェフユナイテッド千葉, Jefu Yunaiteddo Chiba), and also as JEF Chiba (ジェフ千葉, Jefu Chiba), is a Japanese professional football club that plays in J. League Division 2. On February 1, 2005, the club changed its name from JEF United Ichihara to the current name after Chiba city had joined Ichihara, Chiba as its hometown in 2003. The club name, JEF -taken from JR East and Furukawa Electric- and United, represents the unity of the team and its home town.

The team began as the company team, Furukawa Electric Soccer Club (古河電気工業サッカー部) in 1946. As the company team, it won the Japan Soccer League twice, the Emperor's Cup four times and the JSL League Cup three times. Furukawa also won the 1986–87 Asian Club Championship, the top club honor in Asia; they were the first Japanese club to do so.

Since the league's inception in 1965, the team had always played in the top flight in Japan and was the only Japanese team to never be relegated from the JSL1, a record they kept into the J1 years. They did finish the 1978 season in a relegation position (last of 10) but stayed up after beating Honda F.C. 1–0 on aggregate in a two-legged playoff. The last place was not automatically relegated until the 1980 season.

In 1991, it merged with the JR East's company team to become East Japan JR Furukawa Football Club (東日本ジェイアール古河サッカークラブ) and rebranded itself as JEF United Ichihara upon the J. League's founding in 1993. The team initially built itself around the former Germany national football team player Pierre Littbarski.

From 1998 to 2000, the team struggled to stay in the J. League and it began a series of efforts to be a competitive team. Since the hiring of Ivica Osim in 2003, JEF United has contended for the league title each year despite limited resources and struggling attendance.

On July 16, 2006, Osim left the team to take over the coach of the Japan national team and was succeeded by Amar Osim, his son and assistant coach.. On December 5, 2007, it was announced that Amar Osim had been sacked after the club's lowly 13th-place finish in the 2007 season.

After 13 games in the 2008 season Josip Kuže was sacked as team manager. On 8 May 2008 it was announced that the new manager was Alex Miller. Miller was First Team Coach at Liverpool F.C. alongside Rafael Benítez prior to joining JEF United.

The Furukawa Electric is no longer the main sponsor of the club, a job these days taken over by Fuji Electric.

JEF United Chiba was close to being promoted to J. League Division 1 during the 2012 season. The club was considered one of the favorites to be directly promoted to J1. However, after defeats to teams considered lesser than them such as F.C. Gifu and F.C. Machida Zelvia, JEF played the playoffs, making their road to the final. They defeated Yokohama F.C. by 4–0, but lost the final match to Oita Trinita by 1–0, at Tokyo National Stadium.

In the 2013 season they played in the promotion to J1 playoffs. They lost the semi final match to Tokushima Vortis by 1–1(Chiba was 6th place and Tokushima was 3rd place in the league, regulation decides up high club can go final even draw.)

In the 2014 season they played in the promotion playoffs to J1 again. The club did not have to play in the semi-final(Chiba was 4th place but the 3rd place club named Giravanz Kitakyushu had a Jleague original stadium problem so Kitakyushu could not go to the promotion play off). In the final against Montedio Yamagata, they lost by 0–1, at Ajinomoto Stadium.

It had played its home matches at Ichihara Seaside Stadium, but has since moved to the larger, football-specific and more conveniently located Fukuda Denshi Arena, which opened in Chiba during the 2005 season. The club had initially practiced at Urayasu, Chiba planning to base itself in Narashino, Chiba before opposition by those living around Akitsu Stadium forced it to be based in Ichihara. Since 2000, training has been held at Footpark Anesaki in Ichihara in normally. Since 1 October 2009, they made new practice place UNITED PARK near the Fukuda Denshi Arena.

JEF United Ichihara's mascot characters are Akita Inu brothers named Jeffy and Unity. The squad number of Jeffy is 2 and that of Unity is 9.

This was JEF's reserve team during the JSL years. They were formed in 1967 and were first promoted to the JSL Second Division in 1975. They still exist, although they are no longer affiliated on paper, and play in the Kanto Regional League. In 2008 they renamed themselves S.A.I. Ichihara

JEF's reserve team played until 2011 in the Japan Football League, the third tier of Japanese football. But in 2011, the club announced the end of the B team because of financial problems.