The Singapore Tourism Board (Abbreviation: STB; Malay: Lembaga Pelancongan Singapura; Chinese: 新加坡旅游局) is a statutory board under the Ministry of Trade and Industry of Singapore, tasked to promote the country's tourism industry. 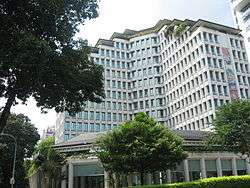 Tourism Court at Orchard Spring Lane, the headquarters of Singapore Tourism Board 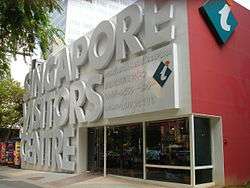 The board was first established in 1964 and was called the Singapore Tourist Promotion Board (Abbreviation: STPB; Chinese: 新加坡旅游促进局). In that year, there were 91,000 visitors. The primary task of STPB was to coordinate the efforts of hotels, airlines and travel agents to develop the fledgling tourism industry of the country.

Later, STPB began to initiate new marketing ideas to promote Singapore's image aboard. The board created the Merlion, a symbol based on a Singapore mythical legend, that became an icon of the Singapore destination. The board has also been providing travel agent licensing and tourist guide training.

STPB actively promoted the development of infrastructure, including the building of hotels and tourist attractions such as the Jurong Bird Park and Sentosa which is now a popular resort island for both tourists and local visitors. The board also markets the city as a convention venue and organises events to attract visitors.

In the 1980s, several historic and culturally significant areas such as Chinatown, Little India and Kampong Glam were earmarked for preservation. These places express Singapore's cultural diversity and became popular tourist destinations. The Singapore River underwent a major cleanup program and the areas along the river were developed for restaurants and other tourist amenities.

The board was renamed as Singapore Tourism Board in 1997.

The board now oversees all aspects of tourism, including resource allocation and long-term strategic planning. It establishes offices around the globe to actively market the Singapore destination.

In the short term, the Singapore government has allocated S$905 million to STB for tourism developments until 2017. A third of this amount will be used to assist the industry to build manpower competencies through education and skills-upgrading initiatives, particularly in key areas such as conference management.[2]

Singapore tourism industry has grown rapidly since STPB was set up. In 2004, there were 8 million visitors. On 11 January 2005, Minister for Trade and Industry unveiled the Singapore Tourism Board’s (STB) bold targets to doubling visitor arrivals to 17 million by 2015, see details here Tourism 2015.

In March 2010, the STB projected a 20-30% increase in visitor arrivals for the year. 2010 would see the much awaited opening of both the Marina Bay Sands and Resorts World Sentosa.[3] This coincided with other key events such as the FORMULA 1 SINGTEL SINGAPORE GRAND PRIX and the inaugural Youth Olympic Games. These offerings were expected to enhance Singapore’s status as a dynamic global city and increase visitor arrivals. The changes in Singapore's landscape would also continue beyond 2010. New developments such as the International Cruise Terminal, Gardens by the Bay and Changi Motor Sports Hub are expected to be unveiled in the coming years.[4]

The STB also announced that it will be adopting a new destination branding strategy. In line with the emphasis on redesigning the tourism experience, the STB launched the evolved destination brand, YourSingapore. YourSingapore is centered on the concentration of experiences available in Singapore and seeks to enable travellers to personalize their visit according to their preferences. The YourSingapore website is an "innovative and intelligent platform" that invites visitors to make their virtual experience in Singapore a reality. The user-friendly website allows users to easily conceptualize and plan their individual itineraries.[5]