Gardens by the Bay

Gardens by the Bay is a nature park spanning 101 hectares (250 acres) of reclaimed land[2] in central Singapore, adjacent to the Marina Reservoir. The park consists of three waterfront gardens: Bay South Garden, Bay East Garden and Bay Central Garden. The largest of the gardens is Bay South Garden at 54 hectares (130 acres).

Gardens by the Bay is part of a strategy by the Singapore government to transform Singapore from a "Garden City" to a "City in a Garden". The stated aim is to raise the quality of life by enhancing greenery and flora in the city.

First announced by the Prime Minister, Lee Hsien Loong, at the National Day Rally in 2005, Gardens by the Bay was intended to be Singapore's premier urban outdoor recreation space, and a national icon.

In 2006, an international competition for the design of the park was held, attracting more than 70 entries submitted by 170 firms from 24 countries. Two British firms – Grant Associates and Gustafson Porter[3] – were awarded the contracts for the Bay South and Bay East Gardens respectively.

Bay Central Garden will act as a link between Bay South and Bay East Gardens. It stands at 15 hectares (37 acres) with a 3-kilometre (1.9 mi) waterfront promenade that allows for scenic walks stretching from the city centre to the east of Singapore.[4] More developments of Bay Central Garden are coming in the next few years.

Bay East Garden is 32 hectares (79 acres) in size and it has a 2-kilometre (1.2 mi) promenade frontage bordering the Marina Reservoir. An interim park was developed at Bay East Garden in support of the 2010 Summer Youth Olympics. The first phase of the garden was opened to the public in October 2011, allowing alternative access to the Marina Barrage.[5]

It is designed as a series of large tropical leaf-shaped gardens, each with its own specific landscaping design, character and theme. There will be five water inlets aligned with the prevailing wind direction, maximizing and extending the shoreline while allowing wind and water to penetrate the site to help cool areas of activity around them.

Bay East Garden provides visitors with an unobstructed view of the city skyline. Upcoming developments of Bay East Garden will be based on the theme of water.

Bay South Garden opened to the public on 29 June 2012.[6] It is the largest of the three gardens at 54 hectares (130 acres) and aims to showcase the best of tropical horticulture and garden artistry.

The overall concept of its master plan draws inspiration from an orchid as it is representative of the tropics and of Singapore, being the country's national flower, the Vanda 'Miss Joaquim'. The orchid takes root at the waterfront (conservatories), while the leaves (landforms), shoots (paths, roads and linkways) and secondary roots (water, energy and communication lines) then form an integrated network with blooms (theme gardens and supertrees) at key intersections.

The conservatory complex at Gardens by the Bay, Singapore, comprises two cooled conservatories – the Flower Dome (Chinese: 花穹) and the Cloud Forest (Chinese: 云雾林), situated along the edge of Marina Reservoir. The conservatories, designed by Wilkinson Eyre Architects, are intended to be an energy efficient showcase of sustainable building technologies and to provide an all-weather edutainment space within the Gardens. Both are very large (around 1 hectare (2.5 acres)) and the Flower Dome is the world's largest columnless glasshouse.[7]

Singapore Skyline at Sunset from Gardensby the Bay

The construction of the glasshouses is special in two ways. First of all by being able to have such large a glass-roof without additional interior support (such as columns). Secondly because the constructions aims strongly at minimizing the environmental footprint. Rainwater is collected from the surface and circulated in the cooling system which is connected to the Supertrees. The Supertrees are used both to vent hot air and to cool circulated water.[8]

The main avenue in the Flower Dome. 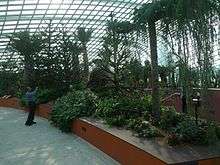 The Flower Dome is the lower but larger of the two, at 1.2 hectares (3.0 acres). It replicates a mild, dry climate and features plants found in the Mediterranean and other semi-arid tropical regions (e.g. parts of Australia, South America, South Africa).

The Flower Dome features seven different "gardens" as well as an olive grove with a bistro and a central changing display field has also been incorporated to enable flower shows and displays to be held within the conservatory. 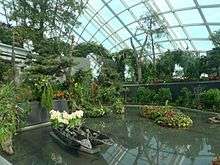 The Cloud Forest is higher but slightly smaller at 0.8 hectares (2.0 acres). It replicates the cool moist conditions found in tropical mountain regions between 1,000 metres (3,300 ft) and 3,000 metres (9,800 ft) above sea level, found in South-East Asia, Middle- and South America. It features a 42-metre (138 ft) "Cloud Mountain", accessible by an elevator, and visitors will be able to descend the mountain via a circular path where a 35-metre (115 ft) waterfall provides visitors with refreshing cool air.

The "Cloud mountain" itself is an intricate structure completely clad in epiphytes such as orchids, ferns, peacock ferns, spike- and clubmosses, bromeliads and anthuriums. It consists of a number of levels, each with a different theme.

Supertrees are tree-like structures that dominate the Gardens' landscape with heights that range between 25 metres (82 ft) and 50 metres (160 ft). They are vertical gardens that perform a multitude of functions, which include planting, shading and working as environmental engines for the gardens.[9]

A night view of the Supertrees.

The Supertrees are home to enclaves of unique and exotic ferns, vines, orchids and also a vast collection of bromeliads such as Tillandsia, amongst other plants. They are fitted with environmental technologies that mimic the ecological function of trees – photovoltaic cells that harness solar energy which can be used for some of the functions of the Supertrees, such as lighting, just like how trees photosynthesize; and collection of rainwater for use in irrigation and fountain displays, exactly like how trees absorb rainwater for growth. The Supertrees also serve air intake and exhaust functions as part of the conservatories' cooling systems.

There is an elevated walkway, the OCBC Skyway, between two of the larger Supertrees for visitors to enjoy a panoramic aerial view of the Gardens. A food and beverage outlet is planned atop the 50-metre (160 ft) Supertree. At night, the Supertrees come alive with a light and music show called the OCBC Garden Rhapsody.

Designed by Grant Associates, which also designed Gardens by the Bay, the Children's Garden was fully funded by Far East Organization for $10 million. This is an attraction for kids aged 5 and below and 6–12 years old. This attraction was opened on 21 Jan 2014. The children's garden is near the treehouse and the adventure trail. The adventure trail consists of trampolines, balancing beams, hanging bridges and many more.

It is open on Tuesdays to Sundays from 9 a.m. to 9 p.m. It will be closed on Mondays, or on the next working day if Monday is a public holiday.[10]

There are two distinctly different sets of horticultural themed gardens which centre on the relationships between "Plants and People" and "Plants and Planet". They are an important part of the Gardens' edutainment programme, which aims to bring plant knowledge to the public.

The "Plants and People" theme features a Heritage Garden that highlights the various cultural groups in Singapore and the important role that plants play in their respective cultures, as well as the country's colonial history. It also focuses on economically important plants to Singapore and South East Asia.

The "Plants and Planet" theme emphasizes the web of relationships amongst the various plants within a fragile forest setting, showcasing the biodiversity of plant life on the planet. 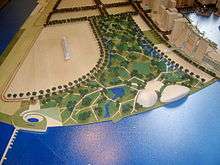 A model by the Urban Redevelopment Authority of the future garden at Marina South.

The Flower Market will eventually be the main entry precinct into the Gardens. It will include an indoor events space, retail and various food & beverage outlets. The main event space is a 2-hectare (4.9-acre) outdoor lawn with a stage.

The final construction cost for the project, not including the price of the land but including an access road, drainage works, and soil improvement, was within a $1.035 billion allocated budget. The annual operating cost was expected to be approximately $58 million, of which $28 million was for operation of the Conservatory buildings. The project received 1.7 million visitors between June and October 2012, who had free admission to most portions of the park but were required to purchase tickets for entering the Conservatories.[11]

The nearest Mass Rapid Transit station is Bayfront MRT station. The Gardens by the Bay MRT station, under construction, will open in 2021.[12]