The Peranakan Museum is a museum in Singapore specialising in Peranakan culture. A sister museum to the Asian Civilisations Museum, it is the first of its kind in the world, that explores Peranakan cultures in Singapore and other former Straits Settlements in Malacca and Penang, and other Peranakan communities in Southeast Asia.[1] It is housed in the Old Tao Nan School building at Armenian Street, which once served as an extended wing to the artefact collection of the Asian Civilisations Museum. 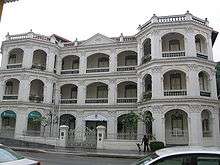 On January 1, 2006 the Museum, known then as ACM 1[1] closed the Armenian Street wing for a major revamp. At its closure, the museum management chose Peranakan culture theme over a children's museum and a Chinese ceramic museum as their new showcase in the Tao Nan School space. This enabled the Museum to house the world's most distinctive and comprehensive Peranakan museum collection of artifacts and wares, with a potential annual visitorship numbers of 112,000 people. Also, the revamp enabled 25 per cent more exhibition space for contextual displays for different aspects of Peranakan home and lifestyle. It also includes plans for Peranakan-themed eateries and shops in the row of four shop-houses adjacent to its building.[2]

The museum officially opened on April 25, 2008, with ten permanent galleries showcasing main themes of Peranakan life. A central feature of the museum is the Peranakan Wedding Bed which once belonged to Mrs. Quah Hong Chiam of Penang, and the very bed where she gave birth to the first seven of her 11 children.[3] 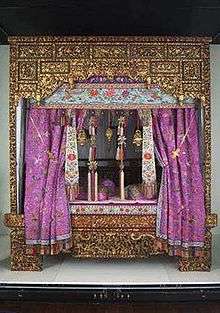 Peranakan Museum's central piece of display, the Peranakan Wedding Bed. Mrs. Quah gave birth to the first seven of her 11 children on this very bed. 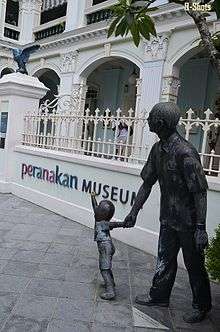 The different galleries are found in the following manner:

Gallery 1 titled Origins provides an introduction to Peranakan culture and to various Peranakan communities in Singapore, Malacca, Penang and Southeast Asia. Visitors to the subsequent rooms will learn about the story of the traditional 12-day Peranakan wedding, where significant ceremonies like the lap chai (exchange of gifts) and chiu thau (coming of age) are presented. Visitors can also see the elaborate wedding chamber and a wedding procession taking place indoors on Level 2. Gallery 6 Nonya, features the arts and crafts of Nonyas like beadwork, along with a display on the Nonya kebaya, and the womenfolks' role of transmitting cultural values to Peranakan children. Gallery 7 shows Religion, on Peranakans and their faiths. Gallery 8 illustrates the commerce, politics and social affairs of prominent Peranakans in Singapore’s history in this exhibition titled Public Life. Gallery 9 on Food and Feasting, provides a grand banquet setting with the world’s best collection of nonya porcelain. And finally the visual experience concludes with an introspection of modern Peranakans and how they feel about their heritage and the future of their culture in Gallery 10 (Conversations). Additional Special Exhibitions Galleries will feature changing specific-themed exhibitions.[3]