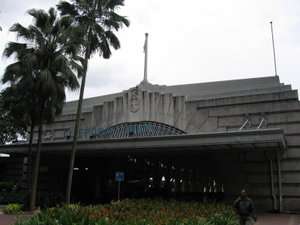 Clifford Pier is a pier located beside Collyer Quay at Marina Bay within the Downtown Core of the Central Area.

Built in 1933, Clifford Pier was a landing point for immigrants and other sea passengers. A red oil lamp used to hang from the pier as a guide to seafarers, earning the pier the name Red Lamp Pier (Chinese: 红灯码头). The pier was later used as a terminal for tourists and day trippers who boarded small boats and ferries heading for the Southern Islands. During the annual pilgrimage season to Kusu Island, regular ferries departed from Clifford Pier to the island. Clifford Pier ceased operations on 1 April 2006, and was replaced by the Marina South Pier.

Before the Tanjong Pagar wharves were built in the 1850s, Johnston's Pier was the chief landing place. By the 1930s, the pier was worn out and the government decided to build a new one and name it after Sir Clifford.

Its opening on 3 June 1933 was boycotted by merchants because they wanted the old name, Johnston's Pier, reinstated. A.L. Johnston was one of the earliest distinguished European residents who was in Singapore at about the same time as Sir Stamford Raffles. A friend of the latter, Johnston was one of Singapore's first businessmen and the founder of the Chamber of Commerce. He was a popular and well-respected citizen whose business was directly connected in those days with imports and exports to and from Europe, ships' victualling and supplies. This meant that ships' captains called frequently on Johnston, who was well known for his kindness, wisdom and hospitality.

Johnston established his company on the site of Whiteaway's Building (now Malayan Bank Building) and in 1848 moved to the present Hong Kong and Shanghai Bank site. In order to facilitate the transportation of import and export goods from boats, a pier was built by the company and named after Johnston. The Hoklos (Hokkien) called it ang theng beh thow, meaning "red lamp harbour", referring to a red beacon which shone over the pier at night as a warning to ships.

Sir Hugh Clifford, on the other hand, although a highly regarded man, had no connection with the port of Singapore or its amenities other than the fact that he was the governor. His activities were largely occupied with his visits to the Malay States and in particular Pahang, the scene of much of his earlier service. 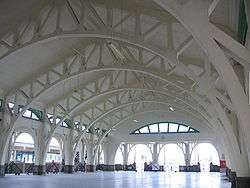 Clifford Pier was designed by the Public Works Department, where Frank Dorrington Ward was then the Chief Architect in the 1930s. The pier has a simple but unique architecture with a roof structure comprising concrete arched trusses in a riband form. Details, such as brackets and even the fire hose cabinets, were evidently designed with much consideration.