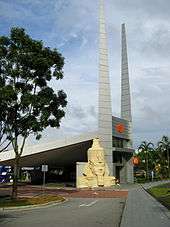 Entrance of the Science Centre

The Science Centre Singapore (Abbreviation: SCS, previously known as Singapore Science Centre[1] is a scientific institution in Jurong East, Singapore, specialising in the promotion of scientific and technological education for the general public. With over 850 exhibits spread over eight exhibition galleries, it sees over a million visitors a year today, and over 17 million visitors up to the year 2003 when it celebrated its silver jubilee.

The Science Centre was carved out of the National Museum of Singapore as a separate institution so that the latter could focus on its artistic and historical collections. This idea was first mooted in 1969 by the Science Council of Singapore, and was subsequently approved by the Government which was keen to promote scientific education in the rapidly modernising country so as to tap into the technological sector. 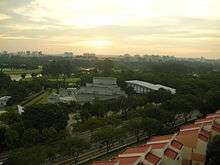 A bird's eye view of the Science Centre in the evening

The SCS building's architecture was decided by an architectural design competition organised by the Science Centre Board. Raymond Woo's entry was selected, and he was thus commissioned as the architect for the project. Built at a cost of S$12 million on a 60,000-square-metre (650,000 sq ft) site in Jurong East, it was officially opened on 10 December 1977 by Dr. Toh Chin Chye, who was the Minister-in-charge of the Science Centre Board.

In 1987, the centre saw a significant expansion with the opening of Singapore's first and only OMNIMAX (now known as IMAX Dome) theatre, the Singapore Omni-Theatre. Costing $18 million, it has a 276-seat theatre underneath a 23-metre (75 ft) tilted dome.

In 1999, a $38 million renovation expanded the centre's exhibition space, and created a new entrance as well as open-air exhibition areas and a direct connection to the separate Omni-Theatre building. In 2000, Snow City, a recreation of a −5 °C (23 °F) environment in tropical Singapore, was set up beside the Omni-Theatre. 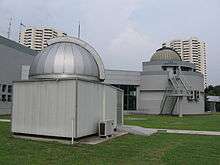 The Science Centre Observatory is situated at 1°20′03″N 103°44′09″E﻿ / ﻿1.3342°N 103.7357°E﻿ / 1.3342; 103.7357, and is 15.27 metres (50.1 ft) above mean sea level. It is one of the few observatories in the world located next to the equator. Its unique position allows constellations in both the northern and southern celestial hemispheres to be observed and thus opens up more vistas in the sky for observers. The Observatory is endowed with a range of sophisticated facilities as well as a classroom for astronomy lessons, slide shows and public talks.

The main telescope of the Observatory is a 40-centimetre (16 in) Cassegrain reflector of a combined focal length of 520 centimetres (200 in). The sub-telescope is a 15-centimetre (5.9 in) apochromatic Kepler refractor with a focal length of 180 centimetres (71 in). The equatorial mount for the telescopes was designed for Singapore's unique location; the accompanying English yoke provides the stability needed for the drive and tracking mechanisms. The 5.5-metre (18 ft) stainless steel dome can be made to swivel in any direction and its shutter can be made to slide open for the telescope to be focused on to interesting objects in the sky.

The Observatory has been open to the public for stargazing sessions every Friday night since June 2006. The opening hours are from 7:50 to 10:00 pm. The Observatory can comfortably accommodate 50 visitors per session. It is important to note that stargazing through the observatory telescope is only possible when the sky is clear. However, regardless of weather conditions, the staff will be present.

On 4 April 2008, the Urban Redevelopment Authority announced plans to relocate the Science Centre next to Chinese Garden MRT Station in ten to 15 years.[2] During his speech at the National Day Rally 2014, the prime minister of Singapore, Lee Hsien Loong said that by 2020, the Science Centre will be relocated to the north shore of Jurong Lake, beside Chinese Garden MRT Station.