The Singapore Flyer is a giant Ferris wheel in Singapore. Described by its operators as an observation wheel,[5] it opened in 2008, construction having taken about 2½ years.[1] It carried its first paying passengers on 11 February, opened to the public on 1 March, and was officially opened on 15 April. It has 28 air-conditioned capsules, each able to accommodate 28 passengers, and incorporates a three-storey terminal building.[6]

The project was formally announced and endorsed on 27 June 2003 by the Singapore Tourism Board with the signing of a memorandum of understanding, formalising the understanding between the developer and tourism board with regard to the land-acquisition process. Under this agreement, the tourism board was to purchase the plot of land in Marina Centre from the Singapore Land Authority, and lease it to Singapore Flyer Pte Ltd for 30 years with an option to extend the lease by another 15 years. The land was to be rent-free during the construction phase of the project. In July 2003, Jones Lang LaSalle was appointed as the real estate advisor. Takenaka and Mitsubishi were selected as the main contractors, and Arup as the structural engineer.

Early designs showed a 169 m (554 ft) tall wheel similar to the London Eye, drawing criticism that it lacked originality. The developers pointed out that the design was not finalised and was merely for conceptualisation purposes, though the final project changed little from the early designs. Subsequently, the project was to grind almost to a halt when the developer faced difficulties in sourcing funds to build the wheel. Original plans to complete the wheel by the end of 2005 were thus postponed indefinitely, and there were reports (denied by the Singapore Tourism Board) that the tourism board has set an ultimatum date of 31 March 2005 for the developer to iron out its financial issues and to keep the development going.

By September 2005, the project was revived when funds were successfully sourced from two German banks. Collin William Page, a subsidiary of ABN AMRO, was to provide equity to a maximum of S$100 million, with a further S$140 million coming from HypoVereinsbank. With this injection of S$240 million, the largest single foreign investment in the Singaporean entertainment industry, construction was slated to begin by the end of the month. The stakeholders then were AAA Equity Holdings, Melchers Project Management, and Orient & Pacific Management.

In August 2007, Florian Bollen, Singapore Flyer Pte Ltd chairman, raised his stake in the Singapore Flyer from 60% to 90% through acquisition of Melchers Project Management's 30% stake. The deal was done via AAA Equity Holdings, a private investment vehicle headed by Bollen. Orient & Pacific Management, which spearheaded the project development management, owns the remaining 10%.

The development has a gross building area of approximately 16,000 m2 (172,000 sq ft), built on a 33,700 m2 (362,700 sq ft) site along the Marina Promenade. Designed by Arup and Mitsubishi Heavy Industries with a capacity of up to 7.3 million passengers a year, the normally constant rotation of the wheel means that a complete trip lasts approximately 32 minutes.[9]

Marina Bay, one of the many views from the Flyer's capsules 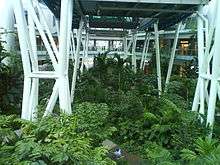 The Flyer's 28 air-conditioned capsules are mounted outboard of the rim of the wheel structure, providing continuously unobstructed views. Each capsule has a floor area of 26 m2 (280 sq ft) and is capable of holding 28 passengers, or up to five wheelchairs and 15 other visitors when booked in advance for use by disabled guests.[11]

The wheel initially rotated in a counter-clockwise direction when viewed from Marina Centre, but on 4 August 2008 this was reversed on the advice of Feng shui masters.[12]

Wheelchair ramps and lifts, handicapped toilets, and a dedicated parking lot for the disabled are also provided.[13]

The groundbreaking ceremony was held on 27 September 2005, with Mah Bow Tan, Minister for National Development, as guest of honour. The spindle was fitted on 13 December 2006, and the outer rim was completed on 9 April 2007. Installation of the passenger capsules began on 3 August 2007[14] and was completed on 2 October 2007.[1]

The Flyer opened in 2008. During Chinese New Year, corporate 'inaugural flights' were held from 11 to 13 February, tickets for which sold out for S$8,888 (US$6,271), an auspicious number in Chinese culture.[5] The first public rides were on Valentine's Day, 14 February, the soft launch on 1 March,[2] and the official opening on 15 April, at which prime minister Lee Hsien Loong was guest of honour.[1][15]

In March 2010, Great Wheel Corporation, a consultant for the Singapore Flyer, was one of several companies named in a report alleging embezzlement, lodged with the prosecutor's office in Berlin, Germany. Transfers of €3 million to companies in the Virgin Islands and UK, and monthly payments of €40,000 from the Berlin wheel's project company, Great Berlin Wheel, to its linked company Great Wheel in Singapore, are questioned. A prosecutor's office spokesperson said: "We understand there were false contracts concerning non-existing deals, and these contracts were made to take the money for private concerns."[22]

On 28 May 2013, the Singapore Flyer announced that it was in receivership. Accounting firm Ferrier Hodgson has been appointed as the receiver and manager of the company's charged assets. Ferrier Hodgson said it is looking into identifying investors to manage and enhance the Singapore Flyer, and will ensure smooth operations at the Flyer throughout the receivership.[23]

On 2014, Merlin Entertainments, the British firm behind the famous London Eye and Legoland theme parks abandoned its talks to acquire the S$240-million tourist attraction located in the city of Singapore. The discussions between the receiver, Ferrier Hodgson and Merlin Entertainments were reported to have begun but the talks between the two parties had broken down. The Singapore Tourism Board reportedly said that discussions are still ongoing with other stakeholders, although it declined to confirm if the talks were with another potential buyer. This crumpled the future for the observation wheel, which have gone through financial difficulties since 2010. [24]

The Bloomberg Television series High Flyers is filmed in one of the Flyer's capsules.[26]