Singapore River planning area sits within the Central Area of the Central Region of Singapore, as defined by the Urban Redevelopment Authority. The planning area shares boundaries with the following - River Valley and Museum to the north, Tanglin and Bukit Merah to the west, Outram to the south and the Downtown Core to the east. 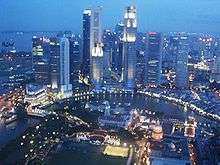 Singapore River at night, as seen from Raffles City

The Singapore River is approximately 3.2 kilometers long[1] from its source at Kim Seng Bridge to where it empties into Marina Bay and finally the Singapore Strait; the river extends more than two kilometers beyond its original source at Kim Seng Bridge as Alexandra Canal, as far as the junction of Commonwealth Avenue, and after that there is a break all the way until Buona Vista, where it becomes Sungei Ulu Pandan and goes into the Sungei Pandan.

Collyer Quay as viewed from what is now Marina Bay, circa 1900s

The mouth of the Singapore River was the old Port of Singapore, being naturally sheltered by the southern islands. Historically, the city of Singapore initially grew around the port so the river mouth became the centre of trade, commerce and finance. To this day, area around the old Singapore River mouth, the Downtown Core, remains the most expensive and economically important piece of land in Singapore.

Boat Quay along the banks of the Singapore River, circa 1900s

Some of the temples, shrines and other places of worship still stand in the vicinity of the river. Bridges such as Anderson Bridge, Elgin Bridge and Cavenagh Bridge still remain, the Merlion, the shophouses, and the large trees such as Banyan and Madras Thorn. Some parts of this area include quays such as Clarke Quay, Boat Quay and Robertson Quay, which generated trade and extensive demand for services with the boats that landed at the quays. Boat Quay itself was handling three quarters of the shipping service in the 1860s. Shophouses and warehouses flourished around the quays due to their proximity to trade during the colonial era, but presently house various bars, pubs and restaurants, as well as antique shops.

When Sir Stamford Raffles landed in Singapore in 1819, he realised the importance of the river for, in the same year of 1819, the north bank was drained for government buildings and, in 1822, the south bank was reclaimed and a retaining wall and steps were built. 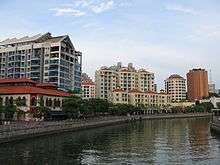 Robertson Quay along the banks of the Singapore River

Through lack of knowledge or foresight, the bridges were constructed too low and the river was too shallow for the demands that were to be made on its use. This historic river, which Raffles had fashioned from salt marshes, sand bars and mangrove swamps, has witnessed the British rule and the Japanese occupation, and has supported years of economic activity by the Chinese, Malays, Indians and others. However, with the expansion of trade came congestion and pollution. 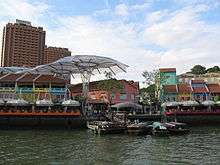 Clarke Quay along the banks of the Singapore River

Starting in the 1819s, there was heavy traffic on the Singapore River due to rapid urbanization and expanding trade.[2] At the same time, it brought in water pollution caused by the disposal of garbage, sewage and other by-products of industries located along the river's banks. The sources of water pollution into the Singapore River and Kallang Basin included pig wastes from pig and duck farms, unsewered premises, street hawkers and vegetable wholesaling. Riverine activities such as transport, boat building and repairs were also found along the Singapore River. Some 750 lighters plied along the Singapore River and Kallang Basin in 1977. Waste, oil spills and wastewater from these boats and lighters added to the pollution of the rivers. In 1977, Prime Minister Lee Kuan Yew called for a clean up of Singapore's rivers, which included Singapore River and Kallang River. The clean up costed the government $170 million. The clean up involved a massive relocation of about 4,000 squatters, along with hawkers and vegetable sellers, whose daily waste flowed into the river. Public housing was found for the squatters, while street hawkers were persuaded to move to hawker centres. The government then dredged foul-smelling mud from the banks and the bottom of the river, and debris and other rubbish cleared.[3]

The river is now part of the Marina Reservoir after damming the Singapore River at its outlet to the sea to create a new reservoir of freshwater. The dam is known as Marina Barrage.

Whereas the original mouth of the Singapore River emptied into Singapore Straits and its southern islands before major land reclamation took place, the Singapore River now empties into Marina Bay - an area of water partially enclosed by the reclamation work. The Port of Singapore is now located to the west of the island, using most of the south-west coast, and passenger ships to Singapore now typically berth at the Singapore Cruise Centre at Harbourfront. Thus the Singapore River's economic role has shifted away from one that of trade, towards more a role accommodated for tourism and aesthetics for the commercial zone which encloses it. 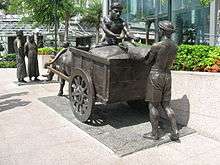 There are a number of sculptures along the Singapore River.[4] Many of these depict the life of people living and working along the river during the early days of Singapore.