Marina Bay Sands is an integrated resort fronting Marina Bay in Singapore. At its opening in 2010, it was billed as the world's most expensive standalone casino property at S$8 billion, including the land cost.[2][3]

The resort includes a 2,561-room hotel, a 120,000-square-metre (1,300,000 sq ft) convention-exhibition centre, the 74,000 m2 (800,000 sq ft) The Shoppes at Marina Bay Sands mall, a museum, two large theatres, "celebrity chef" restaurants, two floating Crystal Pavilions, a skating rink, and the world's largest atrium casino with 500 tables and 1,600 slot machines. The complex is topped by a 340-metre-long (1,120 ft) SkyPark with a capacity of 3,900 people and a 150 m (490 ft) infinity swimming pool, set on top of the world's largest public cantilevered platform, which overhangs the north tower by 67 m (220 ft).[4][5] The 20-hectare resort was designed by Moshe Safdie architects.[6][7][8] The architect was Aedas,[9] and they were responsible for employing all consultants and for developing, co-ordinating and implementing the design. Engineering was provided by Arup and Parsons Brinkerhoff (MEP). The main contractor was Ssangyong Engineering and Construction.[10][11]

Originally set to open in 2009, Las Vegas Sands faced delays caused by escalating costs of material and labour shortages from the outset. The global financial crisis also pressured the company to delay its projects elsewhere to complete the integrated resort.[12] Although Marina Bay Sands has been compared in scale and development costs to MGM's CityCenter, the latter is a mixed-use development, with condominium properties (comprising three of the seven main structures) being sold off.[13][14]

The resort and SkyPark were officially opened on 23 and 24 June 2010 as part of a two-day celebration, following the casino's opening on 27 April that year.[15] The SkyPark opened the following day. The theatres were completed in time for the first performance of Riverdance on 30 November. The indoor skating rink, which uses artificial ice, opened to a performance by Michelle Kwan on 18 December. The ArtScience Museum opened to the public and the debut of a 13-minute light, laser and water show called Wonder Full on 19 February 2011 marked the full completion of the integrated resort.

The grand opening of Marina Bay Sands was held on 17 February 2011. It also marked the opening of the seven celebrity chef restaurants. The musical The Lion King debuted on 3 March 2011.[16] The last portion of the Marina Bay Sands, the floating pavilions, were finally opened to the public when the two tenants, Louis Vuitton and Pangaea Club, opened on 18 and 22 September 2011 respectively.[17]

Marina Bay Sands is one of two winning proposals for Singapore's first integrated resorts, the other being the Resorts World Sentosa, which incorporates a family-friendly Universal Studios Theme Park. The two large-scale resorts were conceived to meet Singapore's economic and tourism objectives for the next decade and will have 30-year casino licenses, exclusive for the first ten years. Bidders were assessed based on four criteria: tourism appeal and contribution, architectural concept and design, development investment, and strength of the consortium and partners

The infinity edge swimming pool in the Skypark

On 27 May 2006, Las Vegas Sands (LVS) was declared the winner with its business-oriented resort.[18] LVS submitted its winning bid on its own. Its original partner City Developments Limited (CDL), with a proposed 15% equity stake, pulled out of the partnership in the second phase of the tender process. CDL's CEO, Kwek Leng Beng said his company's pullout was a combination of factors – such as difficulties in getting numerous companies he owns to comply in time, as well as reluctance of some parties to disclose certain private information in probity checks required by the Singapore government.[19] However, Kwek was retained as an advisor for Sands' bid.

Inside the Marina Bay Sands Hotel

Las Vegas Sands initially committed to invest S$3.85 billion in the project, not including the fixed S$1.2 billion cost of the 6,000,000 square feet (560,000 m2) site itself.[20] With the escalating costs of materials, such as sand and steel, and labour shortages owing to other major infrastructure and property development in the country, Sheldon Adelson placed the total cost of the development at S$8.0 billion as of July 2009.[2][21]

Las Vegas Sands declared the undertaking as "one of the world's most challenging construction projects and certainly the most expensive stand-alone integrated resort property ever built".[22] It expects the casino to generate at least $1 billion in annual profit.[13] Two months after the initial phased opening, the casino attracts around 25,000 visitors daily, about a third being Singaporeans and permanent residents who pay a $100 daily entry levy or $2,000 for annual unlimited access.[23] Half a million gamblers passed through the casino in June 2010.[24] In the third quarter of 2012, the revenues of the Marina Bay Sands fell almost 28 per cent from a year earlier.[25]

For the economy, Marina Bay Sands is projected to stimulate an addition of $2.7 billion or 0.8% to Singapore's Gross Domestic Product by 2015, employing 10,000 people directly and 20,000 jobs being created in other industries.[19] 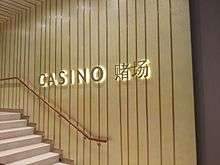 View of a pass way in Marina Bay Sands

The engineering for the project was headed by Arup and Parsons Brinkerhoff (MEP/ELV). 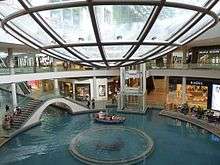 Marina Bay Sands was originally planned to be completed in a single phase in 2009,[21] but rising construction costs and the financial crisis forced the company to open it in phases. The first phase's preview opening was further delayed until 27 April 2010, and the official opening was pushed back to 23 June 2010. The rest of the complex remained under construction and was opened after a grand opening on 17 February 2011.

On 27 April 2010, Marina Bay Sands had the first of a planned 3 to 4 phase openings. The casino, parts of the conference hall, a segment of the Shoppes, 963 hotel rooms and the event plaza were opened at the auspicious time of 3:18 p.m as part of the "preview opening".[28]

The Inter-Pacific Bar Association (IPBA) held the first conference at Marina Bay Sands Convention Centre on 2–5 May 2010, but the event was marred by uncompleted facilities and power failure during a speech. IPBA withheld payment of S$300,000 and was consequently sued by Marina Bay Sands.[29] In June IPBA counter-sued, describing the venue as a "complete disaster" and that its earlier payments had been imposed by "duress, fear and force".[29] An "amicable settlement" with undisclosed terms was announced in August.

On 23 June 2010, the resort had its official opening with a "2-day celebration"; this includes the Sands SkyPark, the Event Plaza along Marina Bay, more shops, additional dining options and nightlife offerings, and the rest of the hotel rooms. First day events included – a "World Championship Climb" on the glass facade of the building to the SkyPark, with 7 teams of 21 top rock climbers from around the world competing, and an evening concert for 4,000 invited guests and customers, featuring Jacintha Abisheganaden, Sylvia Ratonel, Tabitha Nauser and Toni Braxton among others. The SkyPark was opened on the second day at 2 pm,[22] with about 2,000 adult tickets costing S$20 each sold.[30]

The two Sands theatres were completed in time for the first performance by Riverdance on 30 November 2010. The ArtScience Museum opened its doors to the public at 10 am on 19 February 2011. The highly anticipated musical The Lion King made its debut on 3 March 2011. The floating pavilions were opened when the tenants Louis Vuitton and Pangaea Club finished their refurbishment and opened on 18 September 2011 and 22 September 2011 respectively. The Lion King musical ran till its last show on 30 October 2011.[31]

View of the CBD skyline, City Hall, and Esplanade from the SkyPark

View of Singapore Flyer from the SkyPark

Marina Bay Sands has three 55-story hotel towers which were topped out in July 2009. The three towers are connected by a 1 hectare roof terrace, Sands SkyPark.[32] The observation deck provides panoramic views across the bay.[33]

In front of the three towers include a Theatre Block, a Convention and Exhibition Facilities Block, as well as the Casino Block, which have up to 1000 gaming tables and 1400 slot machines. The ArtScience Museum is constructed next to the three blocks and has the shape of a lotus. Its roof is retractable, providing a waterfall through the roof of collected rainwater when closed in the day and laser shows when opened at night. In front of the Event Plaza is Wonder Full, a light and water show that is the largest in Southeast Asia and was produced by Laservision.[34] The ArtScience Museum and Wonder Full show opened on 17 February 2011.

Panorama of the infinity pool

The SkyPark has the world's longest elevated swimming pool,[35][36] with a 146-metre (478 ft) vanishing edge, 191 metres above ground. The pools are made up of 422,000 pounds of stainless steel and can hold 376,500 gallons (1424 cubic metres) of water. The SkyPark also has rooftop celebrity chef restaurants such as Sky on 57 (by Justin Quek), Spago (by Wolfgang Puck), nightclubs such as Ce La Vie, gardens, hundreds of trees and plants, and a public observatory deck on the cantilever with 360-degree views of the Singapore skyline.

There are four movement joints beneath the main pools, designed to help them withstand the natural motion of the towers, and each joint has a unique range of motion. The total range of motion is 500 millimetres (19.68 inches). In addition to wind, the hotel towers are also subject to settlement in the earth over time, so engineers built and installed custom jack legs to allow for future adjustment at more than 500 points beneath the pool system. This jacking system is important primarily to ensure the infinity edge of the pool continues to function properly.[36]

A canal runs through the length of the Shoppes, in the same style as the Venetian in Las Vegas. Sampan rides on the canal are available for guests and shoppers at the shopping mall, similar to the gondola rides available in the Venetian. Also housed within the Shoppes are the six of the ten Celebrity Chef restaurants – Cut (by Wolfgang Puck), Waku Ghin (by Tetsuya Wakuda), Pizzeria and Osteria Mozza (by Mario Batali), Long Chim (by David Thompson), DB Bistro & Oyster Bar (by Daniel Boulud).

There are two Crystal Pavilions. Despite a brief legal dispute in June 2011, it was decided that one of the Pavilions will house two nightclubs – Avalon and Pangaea. In addition, the second Pavilion houses the world's largest Louis Vuitton boutique, in addition to being on a floating island, at 1,900 m2 (20,000 sq ft), which is connected to the portion of the boutique in the Shoppes via an underwater tunnel. Both Pavilions opened in 2011 just before the 2011 Formula One season came to the Marina Bay Street Circuit.

The Sands Theatre and Grand Theatre seat 1,680 people and 2,155 people respectively, with The Lion King showing, and international acts, such as Cirque Éloize and A. R. Rahman's Jai Ho, located in the latter during their world tours. The musical, Wicked, is set to run for a limited season which started 7 December 2011. Next to the theatres is a skating rink (synthetic ice) measuring 600 m2 (6,500 sq ft).

Dragonfire boxing is another regular event, which started on 5 May 2012 with the boxers Chris John with Daud Yordan

Moshe Safdie designed an Art Path within the resort, incorporating installations by five artists including Zheng Chongbin, Antony Gormley, and Sol LeWitt. The pieces are meant to play on environmental influences including light, water and wind, integrating art with architecture.[6][7][8][37]

One of the most common problems is the dropping of keycards into toilet bowls, requiring the attention of maintenance.[38]

In the 2016 movie Independence Day: Resurgence, the property is shown to be destroyed by alien spacecraft.[39]