The Sun Yat Sen Nanyang Memorial Hall, also known as Wan Qing Yuan, and formerly as the Sun Yat Sen Villa, is a two-storey colonial style villa in Balestier, Singapore. The villa is now a museum commemorating Sun Yat Sen (1866–1925), the founding father of the Republic of China who visited Singapore nine times between 1900 and 1911.

Located at 12 Tai Gin Road in Balestier, the villa occupies an area of approximately 3,120 square metres and played a crucial role in the 1911 Xinhai Revolution by serving as the Tongmenghui's base in Nanyang (Southeast Asia) in the early 20th century.

The villa was designed in 1900 and built in 1901 by Boey Chuan Poh (梅春辅; 1874-1926), a businessman who owned the newspaper Union Times. The villa was rumoured to be a home for his mistress Bin Chan, hence it was called "Bin Chan House". In 1902, Boey sold the villa for $10,800 to Lim Ah Siang (林亚相; 1853–1917), the towkay of a timber business in Johor and Singapore and the leader of the Teochew secret society Ngee Heng Kongsi.[1] The building was constructed in a classical colonial style, featuring ornate arched windows and dooors, eaves decorated with floral patterns, and movable louvred windows.

In 1905, rubber magnate Teo Eng Hock (张永福; 1872–1957) – a great-granduncle of Singapore's Deputy Prime Minister Teo Chee Hean – bought the villa for his mother, Tan Poh Neo, as a place of retirement. He renamed it "Wan Qing Yuan", a name inspired by a line from a Tang dynasty poem by Li Shangyin.[2] In July 1905, Sun Yat Sen met Teo, Tan Chor Lam (陈楚南; 1884–1971) and Lim Nee Soon in Singapore through his close friend, Yau Lit, while en route to Europe from Japan. In April 1906, when Sun visited Singapore again, Teo offered his villa for use as the Tongmenghui's headquarters in Southeast Asia. At the villa, the Tongmenghui planned numerous uprisings and fundraising activities leading to the 1911 Xinhai Revolution, which ended imperial rule in China under the Qing dynasty. Three uprisings of the Xinhai Revolution – Chaozhou Uprising (May 1907), Zhennanguan Uprising (December 1907), and Hekou Uprising (April 1908) – were planned in the villa.[1] Teo and his wife, Tan Sok Jee, sewed the flag of the Republic of China in the villa.[3][4]

After Teo sold the villa in 1912, the villa changed ownership multiple times until it was purchased in 1937 by six Chinese leading businessmen in Singapore: Lee Kong Chian, Tan Ean Kiam (陈延谦; 1881–1943), Lee Chin Tian (李振殿), Chew Hean Swee (周献瑞; 1884–1960), Lee Chor Seng (李俊承) and Yeo Kiat Tiow (杨吉兆). In the following year, they donated the villa to the Singapore Chinese Chamber of Commerce (SCCCI).[1] After the establishment of the Republic of China, the Nationalist government funded the refurbishment of the villa and converted it into a memorial hall in 1940. At the same time, they gathered information and artefacts related to Sun Yat Sen from overseas Chinese communities and opened the hall to the public.

During the Japanese occupation of Singapore (1942–1945), the Japanese military used the villa as a communication base and Kempeitai branch office.[1] Many of the original artefacts and furniture of the hall were destroyed. After the war, the Nationalist government funded the restoration of the villa and set up the Singapore branch of the Kuomintang (Nationalist Party) there. However, following the Communist victory in the Chinese Civil War and founding of the People's Republic of China in October 1949, the British colonial authorities forced the Kuomintang branch in Singapore to close down. In 1951, the SCCCI regained ownership of the villa and renamed it the "Sun Yat Sen Villa" after renovations in 1964.

On 28 October 1994, the Singapore government gazetted the villa as a National Monument. Two years later, the SCCCI renamed the villa to "Sun Yat Sen Nanyang Memorial Hall" and announced its plans to expand the place. The villa closed in November 1997 for restoration works at a cost of S$7.5 million. It was reopened to the public as a museum in November 2001. In 2009, the SCCCI appointed the National Heritage Board (NHB) to manage the museum, and redevelopment works took place in October 2010. One year later, the villa was reopened to the public on 8 October 2011 to commemorate the centenary of the Xinhai Revolution. 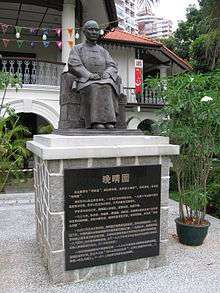 Sculpture of Sun Yat Sen seated on a chair

The villa currently houses a collection of nearly 400 artefacts, including calligraphy works, photographs, old books, paintings and sculptures, spread throughout the five galleries in two levels. The villa is redecorated in the style of an old Peranakan house and has 180 new artefacts added. The Lee Foundation paid for most of the paintings, the bronze wall mural, and bronze statues and busts, which were worth over S$1.5 million in total.