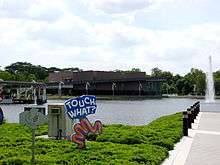 In 1988, the idea of building a museum to showcase the history of the SAF was first mooted. This idea was later evolved into the concept of the S'pore Discovery Centre (SDC). However, SDC is not merely an educational tool for the SAF. It is a platform that provides plenty for Singaporeans to think about and helps them prepare for future challenges.[1]

SDC was officially opened by then president Ong Teng Cheong on 23 November 1996.[3]

In 1989, SDC started a review of the Centre to change from a historical site to an issue-based orientation.[4]

In 2001, Ralph Appelbaum Associates (RAA) was selected as the design consultants for the project. RAA are planners, designers and producers of museum exhibitions, visitors centre and educational enivronments. They are behind many famous institutions such as the United States Holocaust Memorial Museum in Washington, D.C. and the National Constitution Center in Philadelphia.[5]

A presentation was made to the Singapore Totalisator Board in 2002 and a grant of S$25 million was approved. Redevelopment work started in December 2002. [6]

In its first phase it developed in a story telling interactive experience showing Singapore's recent history - living under the flags of Britain, Japan, Britain, Malaysia before becoming an independent nation. Milestones in that journey were picked out in a theatrical setting.'Singapore Today' showed the vibrant life in late 20th century Singapore. Interactive quizzes allowed visitors to discover facts about Singapore. The visually dramatic 'future' exhibit showed that war and peace are two sides of the same coin.

Other galleries include mini-theaters showing the role of tactics and planning in everyday life and showcased the Singapore Armed Forces. Indoor exhibits include 'So Singapore Theatre, Gateway, Portals, Build it, Crisis Simulation Theatre, Harmony Circle etc.[7]

Outdoor exhibits includes a playground and the a display of aircraft.

The Chief Exhibit Designer for the Centre's creation is UK based Neal Potter. The centre was planned by Canadian company Lord Cultural Resources and the building was designed by mgt Architects from Australia.

In 2013, Singapore Discovery Centre was awarded the prestigious Minister for Defence Award (MiDAs) and one of the ten corporate recipients to be inducted into the MiDAs League for a five-year tenure as advocates of national defence.[8]

This article is issued from Wikipedia - version of the 4/6/2016. The text is available under the Creative Commons Attribution/Share Alike but additional terms may apply for the media files.