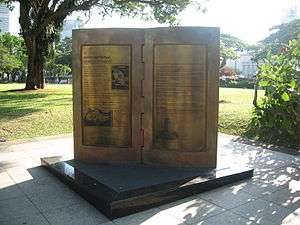 The former Indian National Army Monument site at Esplanade Park in Singapore is now marked by a plaque erected by the National Heritage Board.

The Former Indian National Army Monument (Chinese: 印度国民军纪念碑) is a historical site and a war memorial at the Esplanade Park located at Connaught Drive within the downtown of Singapore.

The monument was constructed to commemorate the "Unknown Warrior" of the Indian National Army (INA). The words inscribed on the war memorial were its motto, which is Unity (Ittefaq), Faith (Etmad) and Sacrifice (Kurbani). It was built during the Japanese Occupation of Singapore as the Japanese and the INA had one enemy in common, i.e., the British.

Subhas Chandra Bose ("Netaji") laid the foundation stone on July 8, 1945, a few months before Singapore was recaptured by the British. The monument was then erected within a month by the Japanese. The construction of the monument was proposed by Bose, the co-founder of the INA and Head of State of the Provisional Government of Free India. The INA was backed by the Japanese forces for its goal of gaining India's independence from Britain.

Later in 1945 after the Japanese retreat from Singapore and the subsequent surrender of the remaining divisions of the Indian National Army to the advancing British, the British commander Lord Louis Mountbatten ordered the memorial to be destroyed. Mountbatten's intention was to remove all traces of rebellion against British imperial authority. By attempting to completely erase all records of the INA's existence, he sought to prevent the seeds of the idea of a revolutionary socialist independence force from spreading into the vestiges of British colonies, amidst the spectre of Cold War politics already taking shape at the time, which had haunted the colonial powers before the war.

In 1995, the National Heritage Board marked the place as a historical site and subsequently with financial donations from the Indian community in Singapore, a new monument commemorating the previous one was erected on that spot.