For other gardens of this name see Tiger Balm Garden

The park, originally called Tiger Balm Gardens, was built in 1937 by the Burmese-Chinese brothers Aw Boon Haw and Aw Boon Par, the developers of Tiger Balm, as a venue for teaching traditional Chinese values. They moved their business from Burma to Singapore in 1926 and purchased the site in 1935.

In 1986 the International Theme Parks Pte Ltd, announced an investment of $30 million to modernise the themed park. This company was a joint venture formed by Fraser & Neave and Times Publishing, and had invested on the latest animatronics and technology to enhance the attractions in hope to create an 'oriental Disneyland', a theme park meeting Western technology with Eastern mythology.[1]

In 1988, the Singapore Tourism Board took charge of the Tiger Balm Gardens and renamed it "Haw Par Villa Dragon World". The Haw Par in the park's name is based on the Aw brothers' personal names—Haw and Par, which mean "tiger" and "leopard" respectively. The dioramas and statues were restored, while plays, acrobatic displays and puppet shows were organised and held there. The management imposed entrance fees but the high fees discouraged visitors, so the management incurred a loss of S$31.5 million over 10 years. The park management made a profit during its first year of operations after renovations in 1994, broke even in 1995, but started incurring losses over the next three years and was forced to provide free entry in 1998. In March 2001, the Singapore Tourism Board renamed it "Tiger Balm Gardens".[2] The park is now open every day from 9 am to 7 pm (with last entry at 6 pm) and admission is free.

In 2014, artists Chun Kai Qun, Chun Kaifeng and Elizabeth Gan, under the curatorial platform Latent Spaces, staged four exhibitions in the theme park's unused spaces. Their first exhibition, Nameless Forms, featured the works by the Chun twins, Darren Tesar, Sai Hua Kuan and collective Yunrubin, which respond to the place’s defunct exhibition halls, idle pavilions and the materials that were left behind.[3]

Entrance to the "Ten Courts of Hell" attraction at Haw Par Villa. The Ox-Headed (right) and Horse-Faced (left) Hell Guards stand guard at the entrance. 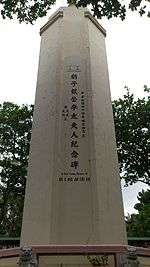 The best known attraction in Haw Par Villa is the Ten Courts of Hell, which features gruesome depictions of Hell in Chinese mythology and Buddhism. This attraction used to be set inside a 60-metre long trail of a Chinese dragon but the dragon has been demolished, so the attraction is now covered by grey stone walls.

Other major attractions include dioramas of scenes from Journey to the West, Fengshen Bang, The Twenty-four Filial Exemplars, Legend of the White Snake, Romance of the Three Kingdoms; statues of mythological figures such as the Laughing Buddha and Guanyin, and historical personages such as Jiang Ziya, Su Wu and Lin Zexu; the 12 animals in the Chinese zodiac, and others. There are also monuments dedicated to the Aw brothers and their parents.

The Circle Line station, Haw Par Villa MRT Station (CC25), located next to it, opened on 8 October 2011 along with the rest of Stage 5 of the Circle Line.[4]