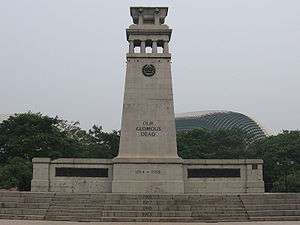 The Cenotaph (Chinese: 战亡纪念碑) is a war memorial located within the Esplanade Park at Connaught Drive, within the Central Area in Singapore's central business district.

The inscription at the base of The Cenotaph reads:

The Cenotaph was built in memory of the 124 British soldiers born or resident in Singapore who gave their lives in World War I (1914–1918), with a second dedication (but no names) added in remembrance of those who died in World War II (1941–1945).

The structure was designed by Denis Santry of Swan and Maclaren. The foundation stone was laid by Sir Lawrence Nunns Guillemard, the Governor of the Straits Settlements, on 15 November 1920. In attendance was the visiting French Premier, George Clemenceau who was the French Minister of War from 1917 to 1919.

The memorial was completed in 1922, and was unveiled on 31 March that year by the young Prince Edward of Wales, later King Edward VIII then Duke of Windsor, during his Asia-Pacific tour. During the unveiling ceremony, a chaplain blessed the Cenotaph with the words, "The stone is well laid and truly laid to the Glory of God and the memory of the illustrious dead." Against the backdrop of the sea then fronting Queen Elizabeth Walk, Governor Guillemard awarded medals of courage to those who had served in the war.

In Prince Edward's entourage was Louis Mountbatten. At the end of World War II, Mountbatten returned to Singapore as the Supreme Commander of the South East Asia Command to receive the surrender of the Japanese at City Hall on 12 September 1945.

On April 23, 2013, the Cenotaph was vandalized when it was discovered that someone had sprayed the word "DEMOCRACY" on the monument as well as an "X" which crossed out the text "1914 to 1918". On April 29, a Singaporean man alleged to have vandalised the Cenotaph war memorial was arrested. Mohamad Khalid Mohamad Yusop was charged with one count of vandalism on 29 April 2013. Under the Vandalism Act, the accused faces a fine of up to S$2,000 or a maximum imprisonment term of up to three years.[1] .[2] On August 26, 2013, he was sentenced to 3 months jail and 3 strokes of the cane as well as ordered to pay SGD$208 compensation to the state for the cost of repairs.[3]