Clayton is a city in and the county seat of St. Louis County, Missouri, United States,[6] and borders the city of St. Louis. The population was 15,939 at the 2010 census.[7] The city was organized in 1877 and is named after Ralph Clayton,[8] who donated the land for the courthouse. The city is also known for its multiple skyscrapers in its business district.

The architecture of central Clayton reflects its economic activity and eras of growth. An impressive collection of mid-century Modernist low and high rise structures contrast with earlier mansions, stores and flats.

In the St. Louis region, Clayton is well known for housing a wealthy and educated young professional, often dual-income population.

There were 5,322 households of which 26.3% had children under the age of 18 living with them, 46.3% were married couples living together, 6.7% had a female householder with no husband present, 1.9% had a male householder with no wife present, and 45.1% were non-families. 37.5% of all households were made up of individuals and 11.2% had someone living alone who was 65 years of age or older. The average household size was 2.12 and the average family size was 2.86.

There were 5,370 households out of which 25.9% had children under the age of 18 living with them, 43.4% were married couples living together, 6.7% had a female householder with no husband present, and 47.9% were non-families. 40.4% of all households were made up of individuals and 11.8% had someone living alone who was 65 years of age or older. The average household size was 2.09 and the average family size was 2.90.

Clayton is governed via six member board of aldermen and a mayor. Aldermen are elected from one of three wards with each electing two members. The mayor is elected in a citywide vote. A city clerk is appointed by the Mayor and Board of Aldermen.

According to the City's 2012 Comprehensive Annual Financial Report,[11] the top employers in the city are:

Clayton's downtown business district has numerous art galleries, boutiques and fine restaurants, and European-style outdoor cafes.[17] The city hosts major cultural and culinary events such as the St. Louis Art Fair and the Taste of Clayton food festival.[18] Also, well-known actor Kevin Kline grew up in the suburbs of Davis Place. And so did Jon Hamm of Mad Men fame. 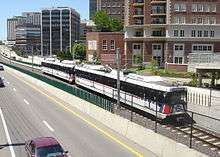 A Blue Line MetroLink train bound for Shrewsbury-Lansdowne I-44 station passes by downtown Clayton. The train is travelling within the median of Forest Park Parkway.

Clayton is served by the Metrolink light rail system. The city has two stations along the Blue Line: Clayton, and Forsyth. Metro also operates bus services in Clayton.

Major roads and highways in Clayton include Interstate 170, Brentwood Boulevard, Hanley Road, and Forest Park Parkway.[19] Old Bonhomme (renamed Forsythe Boulevard when it changes from North-South to East-West direction) in North Clayton is an ancient Native American trail. Wydown Boulevard in Clayton was called one of the nation's most dignified streets in the AIA Architecture Guide to St. Louis.

Washington University in St. Louis is partially located in Clayton.[16][20] The city is also home to Fontbonne University and Concordia Seminary of the Lutheran Church–Missouri Synod.

The School District of Clayton operates public schools. There are three public elementary schools in Clayton, each feeding into the middle and high schools. There is Glenridge Elementary School, located in the Moorlands neighborhood, Captain Elementary School in the DeMun neighborhood near Concordia Seminary, and Meramec Elementary School in Davis Place. All three of these schools feed into Wydown Middle School, located on Wydown Boulevard, across from Washington University. This, in turn, feeds into Clayton High School, which is located next to Shaw Park, near downtown Clayton. Several of Clayton's elementary schools have been closed and/or repurposed. Gay School is now the Clayton Family Center, Maryland School has been leased to a series of daycare/elementary organizations,[21] DeMun School burned in a fire and was replaced by Ralph M. Captain Elementary, and in the wake of the Brown v. Board of Education case abolishing segregated schools, Crispus Attucks School was closed and demolished (an office building was constructed on its former grounds in downtown Clayton).[22]