Armenian Canadians (Armenian: կանադահայեր, kanadahayer) are Canadian citizens of Armenian national background or descent. The 2006 census determined that their number was 50,500[3] and 30,130 had Armenian as their mother tongue.[4] A large part of the Armenian diaspora in Canada came from nations in the Middle East and some from Europe.[5] Canada has also seen increased immigration from Armenia, especially after the collapse of the Soviet Union.

During the late 19th and early 20th centuries, Armenians who had escaped persecution from the Armenian Genocide settled in communities in southern Ontario. Early immigrants congregated in kratarans or reading rooms where Armenian Canadians shared Armenian literature.[6]

Thousands of Armenians made their way to Canada after federal immigration policies became less restrictive during the 1950s. Many newcomers were originally from Middle Eastern countries that were affected by strife such as Egypt, Iran, Lebanon, Syria and Turkey. In the early 1990s, some Armenians immigrated to Canada after the disintegration of the Soviet Union. Since 2015, as a result of the Syrian Civil War, thousands of ethnic Armenians from Syria are coming to Canada.[7]

Most Armenian-Canadians are centered in the provinces of Quebec and Ontario and are active in community life. Smaller communities exist in the central and Maritime Provinces, with a slightly larger community in British Columbia. 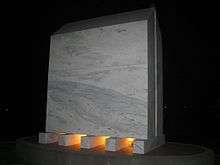 The Armenian Genocide memorial in Montreal, by artist Francine Larrivée

Montreal also boasts the publication of two long-running pan-Canadian Armenian weeklies, Abaka that debut in 1975 and Horizon that started in 1979. Both weeklies are in fact trilingual, as in addition to their Armenian-language content, they run English and French special sections as well on a weekly basis. Horizon Weekly also publishes a monthly literary supplement as well as a monthly youth supplement in addition to the annual New Year's edition.

Montreal also has a monument in remembrance of the victims of the genocide. The monument also serves as a memorial to all peoples who are victims of genocide. It is located in Parc Marcelin-Wilson in the Ahuntsic district of Montreal. 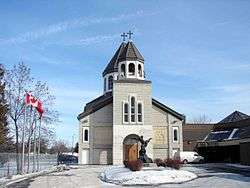 The Armenian community in Toronto, with a 2011 population figure of 17,795,[1] is centered in the neighborhoods of Don Valley Village and Pleasant View in north-central Toronto. The hub of the community is the Armenian Community Centre of Toronto complex at Victoria Park and 401.

St. Mary Armenian Apostolic Church airs a weekly Armenian radio show every Sunday from 8pm to 11pm on 1690am, named The Voice of Giligia.[8]

Armenian Catholics have their own church St. Gregory the Illuminator in Toronto. Toronto Hye, an Armenian-related periodical is published monthly by the community.

With a small thriving Armenian community of 1,425,[1] Canada's capital city is the home of the St. Mesrob Armenian Apostolic Parish.

Due to the growth of the Armenian community, many have established outside the Greater Toronto Area. Present day communities are present throughout the province in Mississauga, St. Catharines, Hamilton, Windsor and Cambridge, numbering roughly 6,000 Armenians.[3]

The community, which had 2,705 people of Armenian ancestry per the results of the 2011 Canada Census,[1] has its own Armenian Apostolic Churches: St Vartan Armenian Church (diocese to the See of Holy Echmiadzin) and St. Greogory the Illuminator (in Richmond, pertaining to the diocese of the Holy See of Cilicia). The diversity of the Armenians in Vancouver, BC ranges from those that immigrated from Iran, Syria, Iraq, Lebanon and even Turkey. The community recently (2014) inaugurated the Armenian Genocide Memorial, which commemorates and was dedicated to the first Genocide of the 20th century, April 24, 1915.